Published by
Evgenia Koptyug,
Apr 20, 2020
Standard weather indicators that are of particular interest to the general population due to their influence on daily life include temperature figures, precipitation amounts and sunshine hours. On a broader scale, decades-long debates and discussions about climate change consequences all over the world underline the importance of weather records not just on international, but on national levels as well.
Seasonal average temperature distributions in Germany’s federal states show that the city-state of Berlin had the warmest summers, while the northern state Schleswig-Holstein documented the lowest figures. Meanwhile, winters were coldest in mountainous Bavaria, and warmest in the more humid states Bremen and Hamburg. In all sixteen German states average winter temperatures were above zero.

Among German cities, the largest amount of precipitation per square meter descended on Oberstdorf in Bavaria, followed by the state capital Munich. Interestingly, contrary to popular belief based on observations about regular rainfall in northern Germany, Hamburg is not the state with the most precipitation.

The weather in Germany is monitored by the German National Meteorological Service (Deutscher Wetterdienst or DWD), which is a federal authority pursuing aims to inform and research. There is also a federal law that regulates the work of the organization. Among the public, many might know the National Meteorological Service first and foremost in connection with its official weather warnings, when conditions in the country are predicted to be critical or dangerous.

In the following 4 chapters, you will quickly find the 28 most important statistics relating to "Weather in Germany".

The most important key figures provide you with a compact summary of the topic of "Weather in Germany" and take you straight to the corresponding statistics. 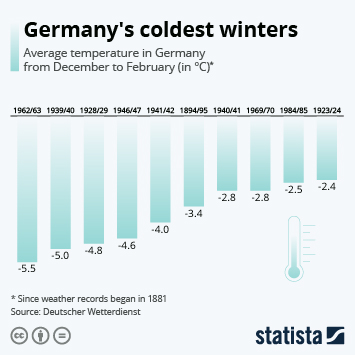