Published by
Madhumitha Jaganmohan,
Apr 23, 2021
Due to the large size and geography of the United States, the contiguous part of the country hosts many contrasting climate regimes. The climate describes the average weather conditions for a specific region at different times of the year. This means that many types of weather patterns are seen in the United States. Various types of meteorological disasters can occur quite often throughout the country.
Temperatures shift considerably between the northern and southern regions in the United States. Although the North does experience warm summers, winters often sustain long periods of cold weather, along with blizzards. The tropical climate in the South is typically warm or hot all year round. Both heat waves and cold spell can travel across the country causing disruption. Extreme precipitation patterns occur in the U.S.—western and central states may experience drought and heavy precipitation damage mainly in the South and coastal areas. The West and Gulf coasts experience some of the heaviest rain events, occasionally as a result of tropical cyclones or hurricanes. Winds from these storms are often intense and sunstained. American weather is also unique due to the frequent presence of tornados, which can be catastrophically large, in the Great Plains and Midwest.

Rising mean temperature in the United States as a result of global warming is evident. While the possible effect on weather patterns is unclear, changes in weather patterns will vary from region to region. Extreme heat events will increase for many locations and many low coastal areas are at risk due to sea level rise.

In the following 6 chapters, you will quickly find the 26 most important statistics relating to "Weather in the United States".

Statistics on the topic
Change in average temperature in the U.S. in the 2010s
1.19 Celsius
Global anomaly in global, land, and ocean surface temperature in 2019
0.84°C
Share of U.S. adults very worried about droughts in local areas as of 2021
9%

The most important key figures provide you with a compact summary of the topic of "Weather in the United States" and take you straight to the corresponding statistics.

Natural disasters in the U.S. 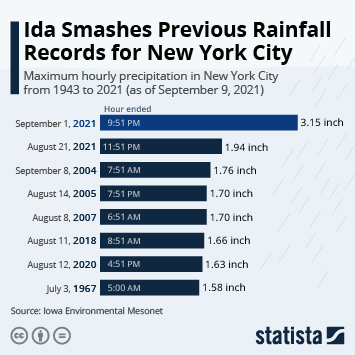