Published by Statista Research Department, Jan 13, 2022
In early 2020, South Korean director Bong Joon-ho’s ‘Parasite’ made history by becoming the first non-English movie to win the Academy Award for Best Picture. It was the first time since 1955 that the Best Picture winner also won the Palme d’Or at Cannes Film Festival. The success of the movie put the South Korean industry back into the spotlight and reminded audiences that South Korean pop culture has more to offer than K-pop and dramas. It also showed that international audiences can enjoy South Korean movies despite the cultural differences, which is one of the main factors behind South Korean movies mainly being exported to Asia instead of Western countries.

What is the global impact of the South Korean film industry?

Hallyu, meaning the Korean wave, is a term that describes the success of South Korean culture outside of its borders. The South Korean film industry played a key role early on, with successful movies like Shiri, My Sassy Girl, as well as Oldboy capturing audiences off the shores of the Korean peninsula. While the focus of the public shifted to K-pop and dramas, the movie industry continued to grow over the last decade. Global survey results showed that South Korean movies were perceived to be popular in their country, and growing into the mainstream media instead of being a niche segment. With international platforms like Netflix including an increasing number of South Korean contents, more consumers are introduced to what the industry has to offer.

What is the domestic market like for South Korean films?

While South Korean movies are gaining international attention, a lot of domestic movies are tailored for the South Korean audience. It is therefore no surprise that the box office revenue of domestic movies was about as much as the box revenue of foreign movies before the COVID-19 pandemic. While both were hit by the pandemic, foreign movies struggled more than domestic films. Recovery in 2021 has been uneven, with a string of international movie blockbusters leading foreign film revenue to overtake domestic movies. The film Extreme Job, an action comedy film directed by Lee Byeong-heon that released in 2019, became the highest grossing domestic movie of all time in South Korea.

How has COVID-19 affected the South Korean film industry?

The total production costs of South Korean films were increasing each year before the outbreak of COVID-19. The pandemic has taken its toll on the movie industry and cinemas around the globe, and South Korea has not been an exception. While cinemas never closed their doors, audience numbers plummeted, with industry experts stating that the film industry was facing its biggest crisis. Nevertheless, the South Korean industry is expected to have a bigger chance of bouncing back early on, compared to the industries in other countries, such as Hollywood.

In the following 5 chapters, you will quickly find the 26 most important statistics relating to "Film industry in South Korea ".

The most important key figures provide you with a compact summary of the topic of "Film industry in South Korea " and take you straight to the corresponding statistics. 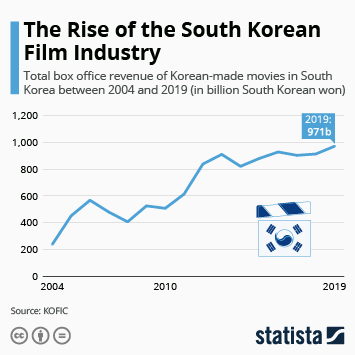