Services for streaming audio and video contents are gaining popularity all around the world. Given that South Korea has one of the fastest internet connections in the world, as well as a high internet penetration rate, this trend is prevalent in South Korea as well. A survey found that the majority of South Koreans preferred to stream music online, while also claiming to prefer streaming TV shows and movies online compared to buying physical or digital copies.

What kind of content is streamed in South Korea?

Music, TV shows, and movies were contents that consumers were most willing to pay for. Nevertheless, when it came to video and music streaming in general, YouTube was enjoying widespread popularity in South Korea. Most South Koreans had used YouTube before but only a small portion of users had used fee-based channel subscriptions. According to Reuters Institute for the Study of Journalism, a significant portion of South Koreans aged 45 and above used YouTube as a news source. YouTube is often cited as the major streaming platform for both music and video content.

On what platform do South Koreans stream music?

According to a survey among audio content users, music was the most preferred form of audio content online. Another survey's results showed that many South Koreans used music streaming services on a daily basis. The most popular music streaming service apart from Youtube was Melon. Since 2009, Melon was part of Kakao M, a South Korean entertainment company previously known as LOEN Entertainment.

Which is the platform preferred by South Koreans to stream videos?

While South Korean video streaming services were dominating the domestic market for quite a while, international streaming giants like Netflix were taking over the South Korean online video market, since they offer content that is both tailored to the South Korean audience as well as a broad range of international content. With international streaming services threatening their market position, two of the biggest domestic OTT platform providers, Oksusu and Pooq, merged into a new service called Wavve in 2019, along with several terrestrial broadcasting services including SK Telecom. This service has continued to grow, even announcing a partnership with NBC Universal. https://www.statista.com/topics/8184/online-video-market-in-south-korea/

What does the future hold for streaming in South Korea?

With the rise of 5G coverage in South Korea, streaming services have become an important selling point to win over customers. Carriers in South Korea are still working on improving both their network and as well as services they can offer to attract new customers and maintain existing ones. One segment to look out for in the future are 5G game streaming services, such as Ubitus or xCloud, although the struggles of Google Stadia might indicate that this particular service needs more time to mature.
This text provides general information. Statista assumes no liability for the information given being complete or correct. Due to varying update cycles, statistics can display more up-to-date data than referenced in the text.

Streaming of other contents 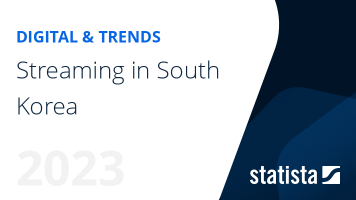 The most important key figures provide you with a compact summary of the topic of "Streaming in South Korea" and take you straight to the corresponding statistics.

Other forms of streaming