Indian beverages, both alcoholic and otherwise, are as diverse as their people, influenced by the country’s vast geography and the weather that comes with it. The overall soft drinks industry market size was about 1.3 billion Indian rupees. Hot summers demand thirst-quenching, refreshing drinks, while chilly winters call for steaming hot cups of tea and coffee. Every region tends to have its own eclectic set of drinks suited for each season. These most likely contain a mix of spices and herbs, with blends concocted with the health benefits of sourcing local ingredients in mind.

Traditional beverages include Aam Panna and Aamras, both made from mangoes. In addition, Jal-Jeera made from cumin seeds is also a popular beverage used in Pani Puris, and Kashmiri Khawah – a tea made from a spice mix for northern colder regions. Furthermore, milk-based drinks include tea, commonly known as chai and coffee is also popular. Lassi is a yogurt-based drink either sweet or salted or buttermilk among other variants. Nutrient-balancing milk drinks also have an important place in the beverage market in India. Brands such as Bournvita, Boost, Complan, and Horlicks were household names.
Among myriad traditional alcoholic drinks, Bhaang and Kallu, or Toddy were also popular. The former is made from buttermilk and cannabis and is commonly consumed during the festival of Holi, primarily in the northern regions. Moreover, Toddy is a form of palm wine tapped from the flowers of the coconut trees and is famous in the southwestern region. Indigenous alcohol of this variety from different parts of the country makes up the country liquor segment of India’s alcohol market.

With economic growth, increasing urbanization, and the ease of traveling worldwide, Indians have the choice to cater to their changing consumption patterns. This has led to carbonated non-alcoholic beverages acquiring a significant share of the market across the country. While Coca-Cola dominated the majority of the carbonated soft drinks industry which includes brands such as Sprite, Thumbs Up, Limca, and Fanta. On the other hand, PepsiCo dominated the juices, nectar, and still drinks market with popular brands such as Tropicana and Slice. Furthermore, the convenience of access to beverages being ready-to-drink works in favor of the big market players such as Pepsi, Coca-Cola, Parle Agro, and Dabur.
This text provides general information. Statista assumes no liability for the information given being complete or correct. Due to varying update cycles, statistics can display more up-to-date data than referenced in the text.
Published by Statista Research Department, Sep 21, 2022

Industry revenue of "Manufacture of beverages" in India 2012-2024 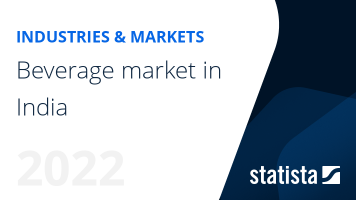 The most important key figures provide you with a compact summary of the topic of "Beverage market in India" and take you straight to the corresponding statistics.