Even though alcohol such as wine or fermented juice is consumed for medical purposes in Ayurveda, its consumption is controversial, and often a politically sensitive topic among Indians. Because of distinct cultural diversity and varying laws regulating Indian states, alcohol drinking habits vary throughout the country. With the development of reasonably priced premium brands and the changing consumer behavior, particularly among the younger generation, the liquor sector in the Indian subcontinent has undergone rapid transformation. On the one hand, excessive alcohol consumption can lead to chronic health problems, while on the other, alcohol sales are a key source of revenue for most Indian states.

The alcohol market in the country comprises of mainly Indian-made Indian liquor (IMIL), Indian-made foreign liquor (IMFL), wine, beer, and imported alcohol. Heavy import duties and taxes make the latter minuscule players in the country’s alcohol market. Most alcoholic imports came from the United States and the United Kingdom. With a market volume of 33 billion U.S. dollars, spirits accounted for the largest segment in the alcoholic drinks market. The most widely consumed indigenous alcoholic beverage is called “Desi Daru”. Molasses, a sugarcane by-product, is used to make it. Desi Daru, in addition to wine and other alcoholic beverages made by indigenous tribes, serves as a foundation for a large segment of India's rural population. However, the most preferred alcoholic beverage among urban Indians was beer.

According to a national survey, approximately 1.3 percent of women regularly consumed alcohol, compared to 18.8 percent of males. In the northeast and east of India, both men and women consumed more alcohol. Additionally, both southern and northern regions of the country had high rates of male alcohol consumption. States with high alcohol consumption among men included Arunachal Pradesh, Telangana, Sikkim, Manipur, Goa, and Jharkhand. All northeast states, as well as Telangana, had high rates of female alcohol consumption as compared to the rest of the country. The legal drinking age varies from state to state, while some states ban alcohol altogether. These included Bihar, Gujarat, Lakshadweep, Nagaland, and some districts in Manipur. Besides, “dry days” occur a few times a year across the country (without exception) during which the sale of alcohol is prohibited. These occurred annually every Republic Day, Independence Day, Gandhi Jayanti, and election days.
This text provides general information. Statista assumes no liability for the information given being complete or correct. Due to varying update cycles, statistics can display more up-to-date data than referenced in the text.
Published by Statista Research Department, Aug 3, 2022

Annual capacity of grain-based distilleries in India 2021, by state

Leading breweries and distilleries in India 2022, by net sales

Most preferred alcoholic beverages in India 2022 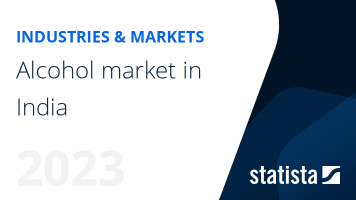 The most important key figures provide you with a compact summary of the topic of "Alcohol market in India" and take you straight to the corresponding statistics.