Published by Statista Research Department, Apr 6, 2022
With a predominantly unorganized market, retailing in India accounts for about ten percent of the country’s GDP. The market was one of the fastest growing in the world. Traditional retailing entailed kirana stores or corner shops, but since 2010, modern retailers were taking over portions of the market, specifically in urban centers.
Not surprisingly, the diversification from traditional to modern retailing affected food retailing as well. The expansion of the modern retail sector saw a drastic increase in the number of supermarkets and hyper-markets across the country. Conglomerates including Aditya Birla and Tata Group had established a strong foothold in this sector, with their respective store numbers growing year after year.

Despite these astounding growth numbers, the unorganized sector continues to dominate the market by a large margin. The Indian retail market is unique compared to other developed markets, largely because the market in the country presents challenges that are not common to the latter. Traditional kirana stores crowded the streets across urban and rural areas, in contrast to organized retailers which were mainly established in urban areas.

With over 15 million traditional corner shops across the country, it was unlikely that large FMCG retailers were able to compete in the long run. Organized retailers such as Reliance Industries seemed to understand this. Instead of creating an us-versus-them situation, Reliance Industries had tied up with kiranas to better the latter’s infrastructure. The aim was to digitize about five million stores by 2023. Reliance, one of the largest conglomerates in the country, is powered by its Jio telecom network, intended to create the world’s largest online to offline e-commerce platform.

In many ways, the coronavirus (COVID-19) pandemic only proved that these stores are an indispensable pillar of Indian retail. Kiranas stayed open to provide essentials even during the lockdown months, their proximity ensuring quick availability in every neighborhood across the country. The pandemic also acted as a catalyst in digitizing these stores to ensure a sustainable supply chain, adopting an omnichannel approach to reach customers.

In the following 6 chapters, you will quickly find the 33 most important statistics relating to "Food retail in India". 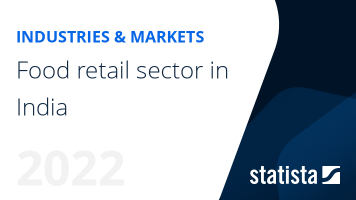 The most important key figures provide you with a compact summary of the topic of "Food retail in India" and take you straight to the corresponding statistics.