Agriculture in the Philippines - statistics & facts

Published by Statista Research Department, Nov 9, 2022
The Philippines is primarily an agricultural country with a large portion of Filipinos living in rural areas and supporting themselves through agricultural activities. Recent figures suggest that about a quarter of employed Filipinos work in the agricultural sector which is made up of four sub-sectors: farming, fisheries, livestock, and forestry. In 2021, the sector generated a gross value added (GVA) of about 1.76 trillion Philippine pesos, equivalent to a 9.6 percent share of the country’s gross domestic product (GDP). However, as a result of the prolonged lockdown imposed due to the coronavirus (COVID-19) pandemic, along with the natural calamities that occurred in the country, the sector’s gross output contracted by 1.7 percent in that year.

Due to its terrain and tropical climate condition, farming and fisheries have been the largest agricultural sub-sectors in the Philippines. Crop production, particularly of sugarcane, palay or rice, coconut, and bananas were among the highest nationwide and were also among the top export products. In recent years, fruits and nuts, along with animal or vegetable fats and oils contributed the largest share of the total agricultural exports of the country. In terms of livestock, hog, cattle, and goat were the country’s major products while chicken and duck were the leading poultry products.

On the other hand, the fisheries sector, which is composed of three subsectors: commercial, municipal, and aquaculture, reflected slow growth in recent years. The export value of principal fishery products from the country had also been declining since 2019 as the volume of production fluctuated. Among the main contributing factors were climate change and the practice of uncontrolled and unsustainable overfishing.

Challenges in the agriculture sector

The slow growth of the agricultural sector in the Philippines had been attributed to the rampant conversion of arable lands to residential subdivisions, industrial parks, and resorts. Of the 30 million hectares of land area, only one-third is used for agricultural activities. On top of that, the country’s geographical location makes it volatile to natural disasters such as flooding and drought, further contributing to the decrease in production. Investments in technology and innovation are necessary steps to diversify and transform the country’s agricultural output, along with increased production support and improved policies that prioritize the needs of farmers.

In the following 6 chapters, you will quickly find the 39 most important statistics relating to "Agriculture in the Philippines". 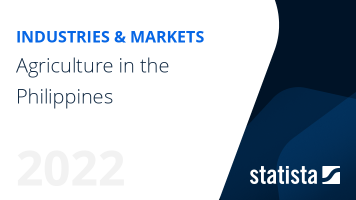 Go to report Agriculture in the Philippines
Top Seller

The most important key figures provide you with a compact summary of the topic of "Agriculture in the Philippines" and take you straight to the corresponding statistics.

Livestock and poultry sectors in the Philippines

Natural disasters in the Philippines

Food retail industry in the Philippines

FMCG market in the Philippines 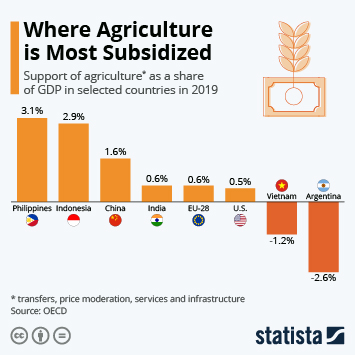