Livestock and poultry sectors in the Philippines - statistics & facts

Livestock and poultry make up two of the most important subsectors in the Philippines' agricultural industry. Of all the animals reared for human consumption, hogs and chickens were the most consumed, contributing to most of the production volume of livestock and poultry in the country. Nevertheless, prolonged lockdown restrictions in response to the coronavirus (COVID-19) pandemic drastically impacted these subsectors. In 2020, the gross value added of the livestock sector contracted by 6.9 percent, the highest among the subsectors in the agriculture industry.

The Philippines is among the largest meat-consuming nations in the world. Backyard and commercial farms rear animals of different types, sustaining the country's growing demand for meat, particularly pork. As of early 2021, the domestic consumption of pork in the Philippines was about 1.4 million metric tons. Along with the rising consumption was the significant increase in the country’s pork imports. In that same period, pork imports amounted to 425 thousand metric tons.

In the second half of 2019, the African swine flu fever that has affected many nations did not spare the Philippines. The spread of the highly contagious virus affected farmed pigs, which resulted in a lower volume of pork produced. As early as January 2021, the production volume of swine meat declined compared to the previous year.

While pork had been a staple in many Filipino meals, chicken meat gained significant popularity among consumers compared to other meats due to its affordability. Broiler chickens had one of the lowest farmgate prices out of all livestock and poultry products reared in commercial farms. An average farmgate price of a broiler chicken or its different breed was just above 90 Philippine pesos per kilo, while pork was sold at about 120 Philippine pesos per kilo. Hence, it was no surprise that the poultry sector’s output value continued rising despite a slight decline in 2020.
This text provides general information. Statista assumes no liability for the information given being complete or correct. Due to varying update cycles, statistics can display more up-to-date data than referenced in the text.
Published by Statista Research Department, Jan 11, 2022

GVA of the livestock industry in the Philippines
179.03bn PHP

GVA of poultry and egg production in the Philippines
175bn PHP 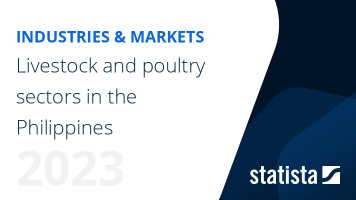 The most important key figures provide you with a compact summary of the topic of "Livestock and poultry sectors in the Philippines" and take you straight to the corresponding statistics.

Per capita production index of livestock and poultry

Production value of the fishing industry