The demand for organic foods in South Korea is on the rise following growing concerns about food safety and food quality. Since organic foods are recognized as being a healthier option, families, in particular, are looking into buying organic. A strong example is organic baby food products. Despite the low birth rate, the organic baby food market grew notably between 2013 and 2017 and was expected to grow further until 2022.

While products like organic baby food are on the rise, the most preferred organic food product to buy in South Korea were organic vegetables. A survey found that only a small percentage of those surveyed would only buy organic food products. South Korea showed the lowest percentage among eleven surveyed Asian countries. According to another survey conducted in April 2019, more than a quarter of respondents stated they would not want to spend more money on organic food than on conventional food. The same survey also found that for a majority of customers the main reason for not buying organic food was the high price.

In South Korea, organic and eco-friendly products are labeled according to their production methods. However, consumers became skeptical after the use of fake certifications for eco-friendly agriculture commodities was exposed in the 2010s. Additionally, many farms that were found to have excessive contamination levels in 2017 were certified as organic. However, this has changed since then, and now more than half of South Korean consumers trust organic certification labels. They also tend to trust the quality of organic foods from the United States and European countries.
Following the 'Environment-Friendly Agriculture/Fishery and Organic Foods Act (Organic Act)' in 2013, imported organic food may only be sold as organic if it has a certificate by the Ministry of Food, Agriculture, and Rural Affairs (MAFRA). This led to a sudden decline of organic food imports until trading agreements with the United States and Europe were established in 2014 and 2015. Organic food imports from the United States are well perceived, but the imports from European countries are rising as well. While consumers trust the quality of the products from those countries, these imports often focus on processed food. Countries such as Chile and China are among the leading countries of origin with unprocessed organic low-price foods.
This text provides general information. Statista assumes no liability for the information given being complete or correct. Due to varying update cycles, statistics can display more up-to-date data than referenced in the text. 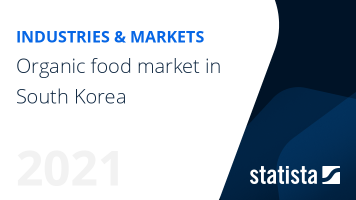 The most important key figures provide you with a compact summary of the topic of "Organic food market in South Korea" and take you straight to the corresponding statistics.