Bulgogi, Samgyeopsal, Galbi, Samgyetang, or even Korean Fried Chicken – a majority of Korea’s most popular dishes are heavily meat based. Meat is found in most Korean dishes and is valued in South Korean society. The total sales volume of meat in South Korea was amounted to around 2.55 million tons in 2018 and is expected to increase further until at least 2023. Around half of the sales volume of meat consisted of pork, followed by poultry, and beef and veal.

In order to meet the country’s demands, the amount and value of meat and edible meat offal imported to South Korea grew over the last years, only decreasing in 2020. Almost half of the imported meat was imported from the United States. The meat trade between the two countries is important for both sides: In 2018, South Korea was one of the biggest export destination for U.S. beef exports. Meanwhile, almost one third of the pork meat imported to South Korea originated in the United States.

In 2020, the average monthly household expenditure on meat has increased again, continuing the upwards trend from before 2019. The main distribution channels for meat were hypermarkets and supermarkets, where more than two thirds of meat were sold. While online grocery shopping is increasingly popular in South Korea, consumers are reluctant to buy fresh meat online, ranking as one of the least popular grocery product for online shopping.

While a growing number of countries show a trend towards meat avoidance, the number of meat avoiders in South Korea is increasing, but not significant. Still the number of vegan and vegetarian population in South Korea experienced a tenfold increase from 2008 to 2021. Between 2014 and 2018, the retail sales of free from meat products did slightly increase but is not forecasted to rise much further. Due to the current wellness boom in South Korea, white chicken meat is enjoying increased popularity. As a low-fat protein, chicken meat has now the image of a HMR (health management resources) item.
This text provides general information. Statista assumes no liability for the information given being complete or correct. Due to varying update cycles, statistics can display more up-to-date data than referenced in the text. 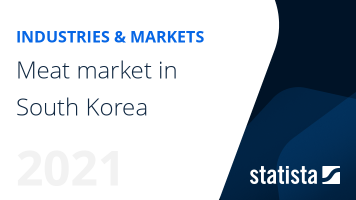 The most important key figures provide you with a compact summary of the topic of "Meat market in South Korea" and take you straight to the corresponding statistics.