Published by
Yihan Ma,
Mar 1, 2022
With a population of over 1.4 billion, China has become the second-largest meat market in the world in terms of revenues, only second to the United States. Nevertheless, when it comes to the per capita consumption of meat, China lags well behind most of the developed countries. Despite China’s long history of livestock production and meat (such as pork, lamb, beef, and poultry) consumption, meat has not always been accessible and affordable for the common population. As of 2021, only three out of four Chinese said they ate meat, the second-lowest among all 39 surveyed countries. However, thanks to an increasing new Chinese middle class, meat products are becoming a more and more a crucial component of the Chinese diet and food sector.

Pork dominates China’s meat market. China is by far the world’s largest pork producer, consumer, and importer. The world’s largest pork company, Virginia-based Smithfield, was acquired by the Chinese company Shineway (later renamed WH Group) in 2013 to accommodate China’s pork demand. China was the world’s top pork consumer in terms of per capita consumption for a decade. However, in 2018-2019, multiple severe outbreaks of African swine fever, a fatal pig disease, killed a quarter of the world’s pig population including around 60 percent of the hog herd in China. Consequently, pork consumption in China plummeted as a result of a supply constraint and price hike. In 2021, China consumed around 22.7 kilograms of pork per capita, ranking fifth among all OECD countries.

Naturally, the swine fever crisis not only led to the inflation of pork prices but also boosted pork imports to China. To satisfy the demand and stabilize the market, China lowered the import tariff on frozen pork from 12 percent to eight percent in 2020. In that year, over four million metric tons of pork was imported to China, primarily from Europe and the United States, roughly quadrupling its imports in 2018. In 2022, due to the gradual recovery of China’s pork production, a higher tariff has been imposed.

A healthier trend in meat consumption

While red meat consumption has decreased in China in the past five years, poultry and fish consumption have increased. As many urban households began to adopt a healthy lifestyle, white meat has grown in preference among the Chinese. In 2021, more than one-third of Chinese consumers described themselves as selective meat-eaters. Processed meat and cured meat were deemed unhealthy and were therefore, avoided by many families in China.

Aside from arising health concerns caused by meat, care for the climate was also a significant reason for the Chinese to consume less red meat. In a 2019 poll, about 92 percent of respondents stated that they started or planned to downsize their red meat consumption, aiming to leave fewer carbon footprints. On the other hand, China has joined the global trend of plant-based meat. More than 40 percent of Chinese consumers in a survey indicated they had tried plant-based meat, which is thought to be healthier.

In the following 5 chapters, you will quickly find the 27 most important statistics relating to "Meat industry in China". 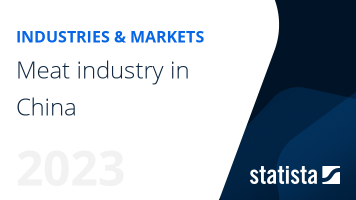 The most important key figures provide you with a compact summary of the topic of "Meat industry in China" and take you straight to the corresponding statistics.

Meat imports and exports in China

Consumption and consumers in China

Meat and seafood in India