Published by C. Diep, Feb 8, 2022
In the traditional Japanese diet, meat used to be neglected as an ingredient due to the archipelago’s high accessibility to deep-sea fishery. However, a change in dietary preferences can be observed in the growing popularity of meat products as the consumption volume grew steadily in recent years.

Like the majority of agricultural products in Japan, the livestock production industry is unable to cover the domestic demand, with the self-sufficiency ratio remaining barely above 50 percent in recent years. To meet the growing consumer interest, the meat industry has become reliant on imported products.
Among the suppliers to Japan, the United States represent the most important trading partners for meat, especially in the trade of beef and veal. To strengthen bilateral trade of agricultural products with other regions, Japan entered trade agreements with the U.S., the European Union, and Australia to open the meat market to foreign exporters.

The domestic market can be broken down into the main meat types: poultry, pork, and beef. While white meat is considered a low-fat source of protein, red meats are predominantly in demand for containing high amounts of iron. Recent trends in the meat market are emerging in particular in the other market segments like horse and game. Horse meat is gaining consumer interest as raw slices (basashi) dipped in sauce or as barbecue (yakiniku).
On the other hand, non-domesticated animals are promoted by the Ministry of Agriculture, Forestry and Fisheries (MAFF) as a natural meat source, which includes deer, boars, and wild birds. Due to the lack of natural predators, the large population of deer and boars are the main cause of damages to the agriculture industry from wildlife. To reduce the damage and further prevent harm to humans, the culling and consequent processing of the animals are encouraged. But only a small share of hunted wildlife reaches the table in private homes, complicated by the need of processing the kill quickly to prevent spoilage. In addition, the market segment is challenged by consumer concerns in regards to food safety, resulting in game meat being consumed only occasionally in restaurants.

In the following 7 chapters, you will quickly find the 36 most important statistics relating to "Meat industry in Japan". 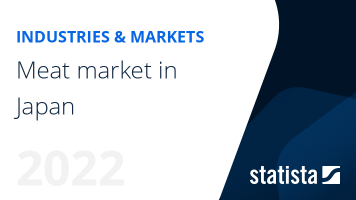 The most important key figures provide you with a compact summary of the topic of "Meat industry in Japan" and take you straight to the corresponding statistics.