The rise of smartphones and mobile applications have unlocked new levels of economic growth in China. Owing to the country’s highly engaged mobile population and booming mobile e-commerce, the red dragon has risen to be one of the largest mobile app economies in the world. In 2020, China's smartphone penetration rate was a modest 63.4 percent, far below the United States, the United Kingdom, and Germany. However, China has already surpassed the United States with over 911 million smartphone users, and this number is still going up. In 2019, Chinese users contributed about a third of the global consumer spending on mobile apps. It suffices to say that China's mobile app market is thriving.

How is the mobile app landscape in China?

To understand the rise of this lucrative market, it is important to first delineate that the app industry in China is quite different from other countries. Since Google Play Store is blocked by the country's Great Firewall, various Android app stores have been developed. Popular western apps are not present in this massive market due to the government’s strict censorship control. Chinese smartphone users spend most of their time on apps affiliated with the homegrown BAT tech giants – Baidu, Alibaba, and Tencent - as well as TikTok's parent company ByteDance. From WeChat and QQ as instant messaging services to Sina Weibo and Douyin as social media, Chinese people have their own mega-hit mobile apps, and some are not even known on a global scale.

How engaged are Chinese mobile users?

When it comes to digital innovation, Chinese consumers seem to be more willing to embrace technological changes in comparison with many other countries. While mobile app downloads are surging across the world, almost half of the traffic is from China. In fact, in the last quarter of 2021, a report revealed that the average Chinese smartphone user installed 65 apps on their phones and mobile app usage stood at 5.1 hours per day. The highly engaged mobile users are also more willing to spend on mobile apps than before. Evidently, the in-app consumer spending is also increasing in the country, especially in gaming, e-commerce, and streaming apps. Considering all these factors, one can fairly predict an optimistic future for the mobile app market in the "Middle Kingdom".
This text provides general information. Statista assumes no liability for the information given being complete or correct. Due to varying update cycles, statistics can display more up-to-date data than referenced in the text.
Lai Lin Thomala
Research expert covering Greater China
Get in touch with us now
Published by Lai Lin Thomala, Mar 10, 2022

Number of app users of leading online companies in China 2022 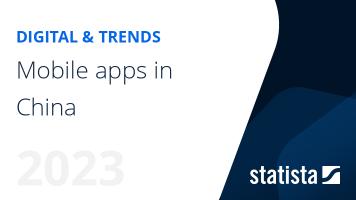 The most important key figures provide you with a compact summary of the topic of "Mobile apps in China" and take you straight to the corresponding statistics.