Published by
Lai Lin Thomala,
Nov 21, 2022
China is home to the largest digital community in the world, with about 1.03 billion netizens as of 2021. Yet, the country’s internet penetration rate was relatively low at 68.3  percent, compared with South Korea and Japan , which ranged over the 90 percent mark. The main setback is the slow progress of internet infrastructures in the remote regions. While the internet adoption rate in first-tier cities, like Beijing and Shanghai, surpassed 80 percent, the average internet access rate in rural China stood below 58 percent in 2021.

The race to dominate 5G

Alternatively, China’s launch of the fifth generation (5G) network has propelled its telecommunication technology to new heights. Countries such as the United States and South Korea also launched their 5G networks around the same time as China in 2019. However, China’s network is by far the largest in the world  with ultra-high and stable network speeds. In terms of the number of patents, Huawei and ZTE were leading the global 5G race as of February 2021. Alongside massive technological advancements, the country would undoubtedly catch up with the global internet access level in the next few years.

Who are the Chinese silicon giants?

The Chinese internet landscape has been dominated by the three homegrown giants Baidu, Alibaba, and Tencent, known as “BATs”. From e-commerce to artificial intelligence, the three tech companies have gone on to build a digital ecosystem, dealing with almost every aspect of the spectrum. Meanwhile, another trio has emerged as a challenger, constituted of the start-ups Toutiao (owned by ByteDance), Meituan-Dianping, and Didi-Chuxing, abbreviated as TMD.

Not "mobile first", but "mobile only"

In fact, the second largest economy in the world is a mobile-centric nation. In 2021, around 99.7 percent of Chinese netizens accessed internet via mobile devices. Over the past few years, Tencent’s WeChat has been the leading app among Chinese mobile users. Apart from its features which are similar to WhatsApp and Facebook, WeChat also serves as the alternative to Amazon, PayPal, Uber, and even Expedia in the country. Thanks to the convenient mobile payment function of WeChat, the adoption rate of online payments amounted to over 87 percent in the Chinese market in 2021.

With mobile and artificial intelligence dominating the global digital world, China’s hopes are dependent on its upcoming technological innovators to expand both its industrial and economic horizons.

In the following 5 chapters, you will quickly find the 27 most important statistics relating to "Internet usage in China". 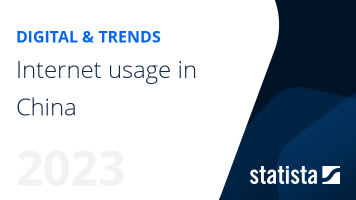 The most important key figures provide you with a compact summary of the topic of "Internet usage in China" and take you straight to the corresponding statistics. 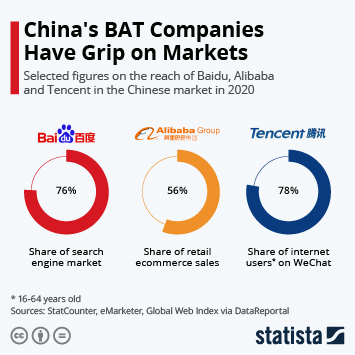 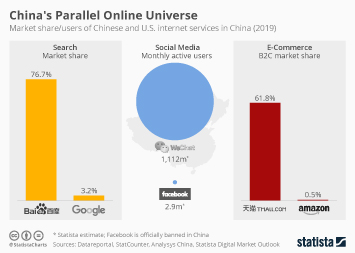