Published by L. Yoon, Feb 28, 2022
For a long time, rising prices and difficulty renting affordable housing have been problems in the real estate and leasing sector in South Korea. Housing affordability has become not only an important social issue in this country, but also a political one. With rising unemployment in recent years, especially among young people, it seems that the general dissatisfaction with the situation has grown while the confidence in real estate policy has been lost.

Despite various government measures, housing prices have risen dramatically in recent years, especially in the capital Seoul and the surrounding Gyeonggi Province, where nearly half of South Korea's population lives. While Seoul had the most lucrative properties in the country, nearly 60 percent of apartments in Seoul were worth over 900 million South Korean won. After Gangnam, Seocho and Yongsan were the most expensive areas in Seoul to live.

Successive governments have brought forth various policies they claimed would solve this problem. For example, governments have imposed higher taxes on people with multiple homes or restricted mortgage loans for high-value home purchases. These various policies attempted to restrict or energize supply and demand but often did not have the intended effect. While most South Koreans still believe that property prices will continue to rise in the coming years, it remains to be seen how the next governments will deal with this problem and to what extent the public will support these policies.

In the following 6 chapters, you will quickly find the 34 most important statistics relating to "Real estate in South Korea".

Statistics on the topic
Number of buildings
7.28m
Most expensive area to live in Seoul
Gangnam
Leading opinion on house prices over the next year
Go up

The most important key figures provide you with a compact summary of the topic of "Real estate in South Korea" and take you straight to the corresponding statistics. 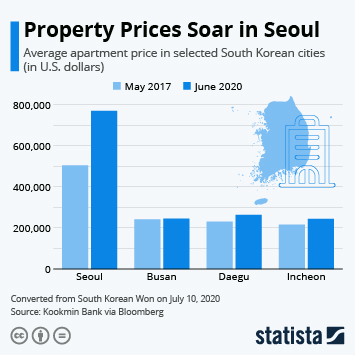