Wheat in the U.S. - statistics & facts

Wheat is one of the oldest types of cereal grass in the world and is produced in almost every single American state. The many varieties of this cereal grain are used to make numerous types of food, such as bread, pasta, cake, and flour. The United States produced almost 45 million metric tons of wheat during 2021/2022, putting the country in fifth place in terms of global wheat production for that period. Within the same period, the United States was also the fifth-largest principal exporter of wheat, flour and wheat products. Russia and the European Union were the largest exporters of wheat that year.

In the United States, about 46.7 million acres of wheat were planted, and about 37.12 million acres were harvested in 2021. Compared to the past two decades, total U.S. wheat area plantation and harvest were both at their lowest in 2020 and increased slightly in 2021. Production was, however, lower in 2021: close to 1.65 billion bushels’ worth of wheat were produced in the United States in 2021. A bushel is a unit of volume equal to eight dry gallons and was mainly used for agricultural purposes.

In 2021, the leading wheat-producing U.S. state was Kansas, which cultivated an estimated 364 million bushels of wheat. In 2020, North Dakota was the leading producer and had a wheat production value of about 1.42 billion U.S. dollars.

A great deal of the wheat produced in the United States is exported to other countries around the globe: during 2019, the country exported over 27 million metric tons worth of wheat. The United States’ top wheat importers in 2019 were Mexico, the Philippines, and Japan, in that order.
This text provides general information. Statista assumes no liability for the information given being complete or correct. Due to varying update cycles, statistics can display more up-to-date data than referenced in the text. 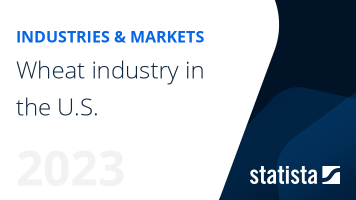 Go to report Wheat in the U.S.
Top Seller

The most important key figures provide you with a compact summary of the topic of "Wheat in the U.S." and take you straight to the corresponding statistics.