Amendments to the Russian Constitution of 1993 were approved during the 2020 national voting in Russia from June 25 to July 1, with nearly 78 percent of voters supporting the changes. Approximately two thirds of Russians took part in the voting. The reform, which included changes to articles on executive power, social policy, and the nation's values, was initiated by Russian President Vladimir Putin in his state-of-the-nation address on January 15. Voters could not select particular amendments they agreed or disagreed with; instead, they could vote for or against the whole new draft of the Constitution. First planned to take place in April 2020, the voting was postponed due to the coronavirus (COVID-19) pandemic. By law, the voting on the amendments was not required, as they were already approved by the parliament in March 2020; the plebiscite was organized to give legitimacy to the reform.

What are the implications of the reform?

The inclusion of the social benefits' indexation in the Constitution and referring to children as one of the main national priorities were among the first amendments proposed. Furthermore, the new edition of the Constitution states its prevalence over international treaties and agreements. It contains an amendment regarding the protection of sovereignty, according to which negotiations with other countries about any of Russia's territories at the time of the amendments could not be conducted. These could include talks on Crimea with Ukraine or the Kuril Islands with Japan. Another amendment, which defines marriage as a union between a man and a woman, would not permit adopting legislation allowing same-sex marriage under the newly amended Constitution. In 2019, three percent of Russians expressed a somewhat positive attitude towards LGBT people.

On March 10, 2020 during the second reading of the draft in the State Duma, a reset of Putin's previous presidential terms due to the constitutional change was proposed. That would allow him to be a candidate for the fifth time for the position after his presidential term ends in 2024. The Constitution has already been amended once to extend Putin's time at the post; in 2008, a presidential term has been extended from four to six years. Under the amended Constitution, presidents after Putin could serve only up to two terms. Their executive powers would be restricted more by the parliament and the Constitutional Court. Putin is the country's second longest-serving leader.
This text provides general information. Statista assumes no liability for the information given being complete or correct. Due to varying update cycles, statistics can display more up-to-date data than referenced in the text.
Published by Statista Research Department, Nov 22, 2022

Results of the constitutional voting in Russia 2020

Turnout at the constitutional voting in Russia 2020

Opinion on the Constitution 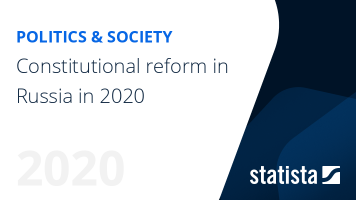 The most important key figures provide you with a compact summary of the topic of "Constitutional reform in Russia 2020" and take you straight to the corresponding statistics.