Artificial Intelligence (AI) refers to the simulation of human intelligence in machines. Early work on Artificial intelligence started in the middle of the 20th century and has been growing ever since. Nowadays AI is being used in numerous different industries and provides various services and its market size has been constantly increasing and is expected to continue so. The United Kingdom was the leader in adopting artificial intelligence in businesses as of 2019, with close to half of the interviewed decision makers in the country reporting to be using AI. Norway ranked second, followed by Spain, Italy and Portugal.

With cybercrime arising as a problem, the leading issue which Finns, Norwegians and Swedes stated to be willing to resolve with the help of artificial intelligence, was detecting frauds and security breaches. Regarding people’s every-day use of artificial intelligence, the Google search engine was considered the most popular among Swedes in 2018. Social networks, streaming services, as well as home assistants were also commonly used by the respondents.

Many AI startups have been established in the Nordic countries, and there were 80 AI startups in the Swedish capital Stockholm as of August 2019. However, Denmark seemed to be the most investing in digitalization within the Nordic countries. Roughly one third of the private businesses used private equity or venture capital for this purpose. Furthermore, executives of leading Nordic enterprises were asked how much their organization invested in digital technologies in 2019 and allthough the majority had not invested large amounts in the past 12 months, nearly one third were planning to invest more than 20 million euros in the following 24 months.
This text provides general information. Statista assumes no liability for the information given being complete or correct. Due to varying update cycles, statistics can display more up-to-date data than referenced in the text. 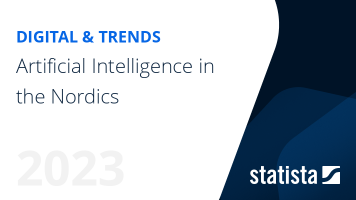 The most important key figures provide you with a compact summary of the topic of "Artificial Intelligence (AI) in Scandinavia" and take you straight to the corresponding statistics.