In the UK, 30 percent of the population have consumed cannabis at some point in their lifetime. While, around eight percent have used cannabis in the last year. Although with lower support than that of legalizing medical cannabis, the legalization of cannabis for general use is supported by the majority of the British population. According to the survey carried out in 2018, 59 percent of Brits would support the legalization of cannabis, with nearly 70 percent of 18 to 24-year-olds backing legalization. Additionally, 52 percent oppose the prosecution of those using cannabis unlawfully for medical conditions.

Due to the current narrow medical cannabis legislation in the UK, there is a large amount of people in the country who turn to illegal cannabis to relieve their symptoms and side effects of health conditions. It is estimated that over 41 percent of those currently suffering from Huntingdon’s disease and schizophrenia use cannabis obtained from the ‘street’ to help with their issues. 56 percent of those taking cannabis for medical conditions are using daily to abate their symptoms, with a further 24 percent doing so weekly. Likewise, sufferers are spending substantial monthly amounts of money on cannabis, illustrating that a wider ranging medical cannabis law would benefit a great deal of people financially as well as medically.

In the following 5 chapters, you will quickly find the 24 most important statistics relating to "Medical cannabis in the UK".

The most important key figures provide you with a compact summary of the topic of "Medical cannabis in the UK" and take you straight to the corresponding statistics. 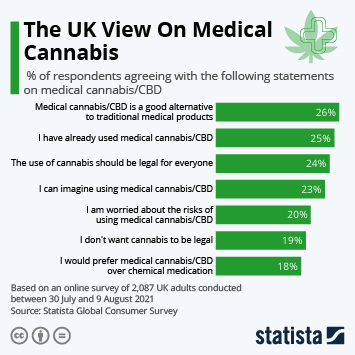