Published by Statista Research Department, Apr 27, 2022
It is estimated that 5.5 percent of the global population between the ages of 15 and 64 years used an illicit drug in 2018. That represents an increase since 1990. The magnitude of the drug problem in Europe becomes more apparent when considering the rate of problem drug use in individual countries; The highest problem drug use was in Czechia with 12.1 individuals per 1,000 recognized as a problem drug user, suffering from drug use disorders or drug dependence.
The number of people in Europe who have used illicit drugs varies by drug type; Marijuana ranks first with an estimated 27 percent of individuals having used it in their lifetime and half of regular users smoking it every day. The prevalence of cocaine use is comparatively lower in Europe; The United Kingdom, Spain, and the Netherlands record the highest prevalence at over 2 percent of users among their populations. While, in most European countries the prevalence of amphetamine use is below one percent.

According to the European Monitoring Centre for Drugs and Drug Addiction, the highest share of individuals who died from drugs in Europe were aged between 40 and 64 years old. The highest amount of drug induced deaths in Europe in 2019 was in both Sweden and Norway at 77 deaths per million population. The number of individuals in substitution treatment for opioid addiction in Europe was reported to be over 510 thousand in 2019, with the majority of them entering treatment for heroin addiction.

In the following 5 chapters, you will quickly find the 22 most important statistics relating to "Drug situation in Europe".

The most important key figures provide you with a compact summary of the topic of "Drug situation in Europe" and take you straight to the corresponding statistics.

Drug use in Canada

Substance addiction and drug use in Belgium

Drug use in the United Kingdom (UK) 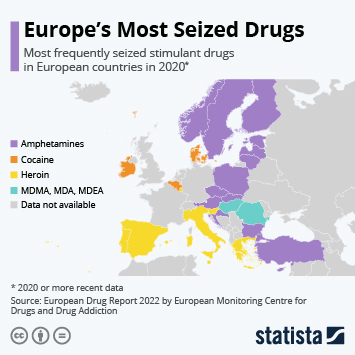 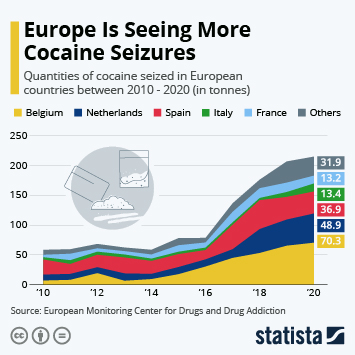 number of drug seizures on the rise