Internet of Things (IoT) in the U.S. - statistics & facts

An increasing number of electronic devices are becoming internet-enabled each year, allowing for more sophisticated communication and coordination between them and their users. Electronics devices, ranging from laptops to thermostats, to automobiles are being connected, forming a network called the Internet of Things (IoT). In 2022, the number of IoT devices is forecast to reach over 13 billion, surpassing the number of people on earth, showing how integrated technology is becoming.

IoT in the United States

The North American market is one of the largest in the world, and U.S. based companies such as Google, Cisco, and IBM are some of the leading names in the field. By 2025, an estimated 5.4 billion IoT connections are forecast for North America alone. The ability of the North American IoT market to double in value over the course of just a few years comes down to the wide range of applications and industries that can benefit from this increased connectivity of devices. Since the first IoT device, a "smart" vending machine on the Carnegie Mellon University campus, the phenomenon has spread in scope from basic smart devices to smart homes, smart buildings, and even smart cities.

As the revenue figures grow, so do the number of individual IoT compatible devices. Smartphones, fitness trackers, portable wireless speakers, and internet-enabled TVs are some of the most popular consumer smart devices, with each accumulating tens of millions of shipments each year. In the past few years, smart homes have grown in popularity as smart speakers such as the Amazon Alexa and Google Assistant have proved themselves valuable additions to American households.

The popularity of IoT devices isn’t limited to just households; businesses across the United States are also taking advantage of IoT-based technologies to streamline processes and increase efficiency. Around 34 percent of North American and European organizations currently use IoT technology within their business operations, and another 12 percent plan to integrate IoT technology within the next year.
This text provides general information. Statista assumes no liability for the information given being complete or correct. Due to varying update cycles, statistics can display more up-to-date data than referenced in the text.

Ownership rate of smart home devices in the United States 2022 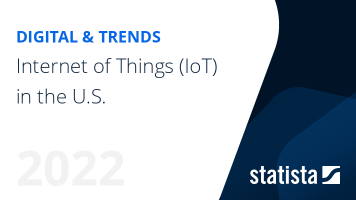 Go to report Internet of Things (IoT) in the U.S.
Top Seller

The most important key figures provide you with a compact summary of the topic of "Internet of Things (IoT) in the U.S." and take you straight to the corresponding statistics.