Published by
Doris Dokua Sasu,
Nov 28, 2022
Sexual health is defined by the World Health Organization as a state of physical, mental, and social well-being related to sexuality. Various aspects can influence an individual's sexual experiences, such as sex education, cultural environment, diseases, as well as family and the social context in which a person grows up. In Nigeria, one of the major influences on public health is the spread of sexually transmitted diseases (STDs) and, in particular, human immunodeficiency viruses (HIV). The proportion of people infected by HIV in Nigeria is not among the highest overall, but through its very large population, the number of people living with HIV is high. Indeed, Nigeria registers some of the highest numbers of AIDS-related deaths in the world.

Estimations counted 1.9 million HIV-positive people in Nigeria in 2021. Approximately 140 thousand were children under 14 years as of 2020. That same year, Nigeria recorded the highest rate of children infected with HIV passed on through their mother worldwide. A study conducted in Nigeria analyzed the level of knowledge about HIV transmission. Among others, the questionnaire asked respondents about the prevention of mother-to-child transmission of HIV. About 60 percent of women in Nigeria were aware that HIV could be transmitted during pregnancy, during delivery, and by breastfeeding. Mother-to-child transmission of HIV is also known as perinatal transmission. It can be largely limited by the use of HIV medicines and other strategies followed during pregnancy, childbirth, and post-delivery.

In the following 5 chapters, you will quickly find the 24 most important statistics relating to "Sexual health in Nigeria".

Statistics on the topic
Deaths caused by HIV/AIDS in Nigeria
5.18%
People living with HIV in Nigeria
1.9m
People with HIV receiving antiretroviral therapy in Nigeria
90% 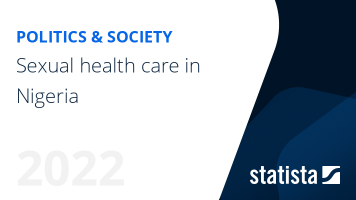 The most important key figures provide you with a compact summary of the topic of "Sexual health in Nigeria" and take you straight to the corresponding statistics.

Doris Dokua Sasu
Research Expert covering primarily society and agricultural topics for Africa, particularly Ghana and Nigeria
Get in touch with us now