Fixed-line telecommunications commonly refer to the wired networks that support fixed broadband and telephone services. These forms of communication can be viewed as a connection to an end customer using a cable, through which the user can connect to the internet or make a phone call. Fixed data, or fixed broadband, involves the use of a variety of technologies for any high-speed data transmission to a residence or a business. Methods of transmission include cable modem internet, digital subscriber line (DSL) internet, fiber optic cable, and other fixed broadband technology connections. A landline telephone, or fixed phone line, is a telephone that transmits signals using metal wire or fiber optic cable, as opposed to wireless transmission as seen in mobile phones.

Revenue from fixed data communication services is expected to exceed 410 billion U.S. dollars in 2022, a rise of close to five percent compared to the previous year. The number of fixed broadband subscriptions worldwide has continued to grow, reaching close to 1.3 billion by the end of 2021, with the majority being in the Asia Pacific region. Furthermore, Singapore and Thailand were among the countries with some of the fastest fixed broadband internet speeds - 211.36 Mbps and 189.14 Mbps, respectively - preceded only by Chile, and followed by China and Hong Kong.

Revenue from fixed voice communication services is predicted to reach close to 142 billion U.S. dollars in 2022, a fall of over three percent compared to the previous year. Figures suggest there were around 884 million fixed telephone line subscriptions worldwide in 2021, with the market experiencing a gradual decline from the 2006 peak of over 1.26 billion. The advancement of mobile network technology, as well as older, networking infrastructure such as copper wiring becoming obsolete, has meant landline telephone use has declined in popularity. Instead, consumers are looking toward a newer digital technology known as voice over internet protocol (VoIP) which refers to phone calls that are made through the internet, rather than through a regular landline or a mobile network.
This text provides general information. Statista assumes no liability for the information given being complete or correct. Due to varying update cycles, statistics can display more up-to-date data than referenced in the text.

Petroc Taylor
Research expert covering global developments in the use of data
Get in touch with us now
Published by Petroc Taylor, Sep 27, 2022 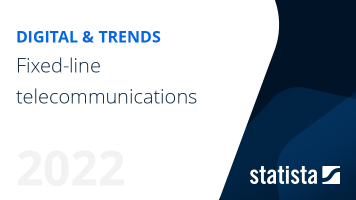 The most important key figures provide you with a compact summary of the topic of "Fixed-line telecommunications" and take you straight to the corresponding statistics.