Published by Ani Petrosyan, Jan 3, 2023
All around the world, the internet continues to transform how we connect with others, organize the flow of things, and share information. With its growing influence on individual consumers and large economies alike, the internet has become an increasingly vital part of our day-to-day lives. In 2021, the number of internet users worldwide stood at 4.9 billion, which means that almost two thirds of the global population is currently connected to the world wide web. But while the digital population is visibly growing in many parts of the world, internet access and availability can differ significantly depending on the region.

Online populations around the world

As of 2021, China remains the leading online market in the world, followed by India and the United States. Overall, East Asia is the region with the highest number of internet users worldwide, whereas Northern Europe is the region with the highest global internet penetration rate. Compared with countries like Iceland or Denmark, whose internet penetration rates are approaching 100 percent, China’s online penetration rate is still relatively low at 58 percent. This setback can be explained by the slow progress of digital infrastructures in remote regions – an obstacle that is still visible in many parts of the world.

While global internet access is increasing steadily, connection quality is superior in countries with developed infrastructures. As of 2021, Monaco has the fastest average fixed broadband internet speed worldwide. Mobile internet has become increasingly widespread and popular over the past few years, as smartphones are more readily available and affordable than ever. As internet users are gradually switching to mobile devices to browse the web on the go, mobile internet now accounts for almost 57 percent of total web traffic worldwide.

As the internet has become an indispensable tool for information, communication, and entertainment, the average daily time spent with the internet per capita is increasing every year. In 2021, users spent an estimated 192 minutes per day online, primarily via smartphone. Some of the most popular mobile internet activities include the use of instant messaging services, video streaming platforms, and social media. On average, internet users spend over 140 minutes per day on social media, with Facebook remaining the leading social network worldwide.

The global rise of e-commerce and digital awareness

Over the past few decades, the internet has also transformed the way products are bought and sold all over the world. As shoppers are increasingly making purchases online, global retail e-commerce sales surpassed 4.2 billion U.S. dollars in 2020. A growing number of online transactions are carried out via mobile devices, making m-commerce an ever-more profitable industry. But while digital literacy is expanding, so are the concerns about online privacy, fraud, and hacking.

In the following 6 chapters, you will quickly find the 58 most important statistics relating to "Internet usage worldwide". 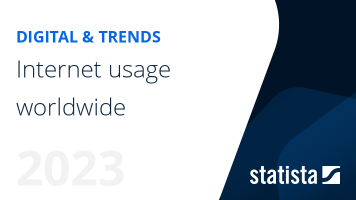 The most important key figures provide you with a compact summary of the topic of "Internet usage worldwide" and take you straight to the corresponding statistics.

Coronavirus: impact on online usage in the U.S. 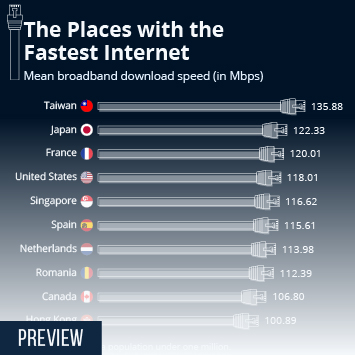 The Places with the Fastest Internet 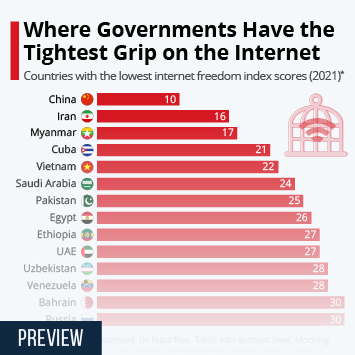 Where Governments Have the Tightest Grip on the Internet