In previous years, there were significantly more companies manufacturing wearing apparel than footwear in Denmark. In fact, the number amounted to 363 clothing manufacturers and only 20 footwear manufacturers as of 2018. Accordingly, that same year, the number of employees in the domestic clothing industry was higher than in the footwear sector. For instance, the employee number in clothing retail was approximately 12.2 thousand people, while there were 1.6 thousand employees in footwear retail.

Among the companies operating in the Danish clothing industry, Bestseller A/S is the leading fashion enterprise. Based on the latest available figures, the family-owned clothing and accessories company generated over 14 billion Danish kroner as of July 2020. Bestseller was founded in 1975 and also operates the brands ONLY, VERO MODA, Noisy may, JACK & JONES, ONLY & SONS, and SELECTED HOMME/FEMME. Revenue showed an increasing trend in recent years, growing from almost 22 billion Danish kroner in the financial year of 2014/15 to around 24 billion Danish kroner in 2019/20. As of July 2020, in the footwear revenue ranking, ECCO Sko A/S was leading by generating approximately 1.4 billion Danish kroner. The company was founded in 1963. It manufactures and sells footwear, as well as accessories and small leather goods. ECCO Sko markets its products worldwide. In the period from 2010 to 2019, revenue rose constantly as well, peaking at around 1.4 billion euros in 2019.

According to a survey from 2019, most Danes bought their clothes at “fast fashion” stores such as H&M, Zara or Mango, while not even 20 percent stated to buy clothes in secondhand shops. The most important factors influencing clothing purchases were fit, the price and quality, and only to a small degree the ecological impact of the product. Also, another reveal from this survey was that 56 percent of Danish consumers preferred to buy new clothes regularly throughout the year.
This text provides general information. Statista assumes no liability for the information given being complete or correct. Due to varying update cycles, statistics can display more up-to-date data than referenced in the text.
Published by Statista Research Department, Feb 21, 2022

Number of employees in clothing wholesale in Denmark
8,82

Employees in the clothing wholesale industry in Denmark 2009-2020

Number of employees in footwear wholesale in Denmark
941

Employees in the footwear wholesale industry in Denmark 2009-2020 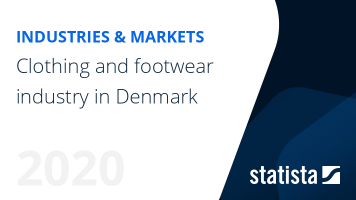 The most important key figures provide you with a compact summary of the topic of "Clothing and footwear industry in Denmark" and take you straight to the corresponding statistics.