Among the companies operating in the Swedish clothing industry, the H&M Group is the leading fashion enterprise. Based on the latest available figures, the group generated over 121 billion Swedish kronor as of June 2020. H&M comprises, among others, the fashion brands H&M, COS, Weekday, Cheap Monday, & Other Stories and Monki, and operates stores worldwide. That same time, in the footwear revenue ranking, BRAV Sweden AB was leading by generating approximately 196 million Swedish kronor. Brav is a major player in the sport and outdoor industry and owns the brands Swix, Toko, Lundhags, Ulvang, Helsport and Hard Rocx.
The H&M Group was not only the leading fashion company in Sweden, it was also among the top three clothing/ footwear retail companies worldwide with roughly 24.8 billion U.S. dollars generated in sales in 2019. That same year, the companies’ sales were highest in Germany, followed by the United States and the United Kingdom.

From 2008 to 2018, consumer expenditure on clothing and footwear increased, reaching nearly 88 billion Swedish kronor by the end of the period. According to a survey from 2019, most Swedes bought their clothes at “fast fashion” stores, while only around half stated to buy clothes in secondhand shops. The most important factors influencing clothing purchases were fit, the price and quality, and only to a small degree the ecological impact of the product.
This text provides general information. Statista assumes no liability for the information given being complete or correct. Due to varying update cycles, statistics can display more up-to-date data than referenced in the text.
Published by Statista Research Department, Feb 21, 2022

Consumer price index (CPI) of clothing and footwear in Sweden
188.68

Number of clothing companies in Sweden
3,921

Number of footwear companies in Sweden
591

International trade in footwear and accessories 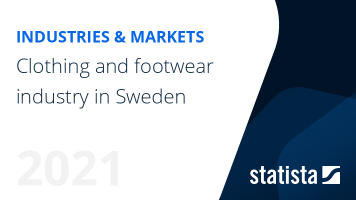 The most important key figures provide you with a compact summary of the topic of "Clothing and footwear industry in Sweden" and take you straight to the corresponding statistics.