Overall, in the past couple of years, the revenue from wearing apparel in Norway showed an increasing trend. As of 2018, clothing manufacturers generated a total of roughly 2.9 billion Norwegian kroner. The category of wearing apparel and accessories achieved the highest revenue, followed by outwear and workwear. By comparison, in the same time, the revenue of footwear manufacturers decreased and reached a remarkably low value of 11 billion Norwegian kroner.

In Norway’s clothing industry, the fashion giant H&M AS led the revenue ranking of clothing companies. Based on the latest available figures, the group generated over 4.2 billion Norwegian kroner as of July 2020. Among the top enterprises, the chain Cubus AS, which is the largest fashion brand of the Norwegian group Varner AS, ranked third. Varner Gruppen AS was founded in 1962 and is based in Oslo. The company is one of the major fashion retailers in Scandinavia, operating the brands Cubus, Dressmann, Dressmann XL, Bik Bok, Carlings, Volt, Urban, WOW, Levi’s Store and Nike Store. From 2009 to 2019, Varner’s operating income generally increased, peaking at almost 782 million Norwegian kroner by the end of this period.
When looking at footwear companies operating in the Norwegian shoe industry, Euro Sko Norge AS had the highest revenue. Euro Sko operates its retail stores not only in Norway, but also in Sweden and sells shoes for men, women, and children. According to the latest available figures as of July 2020, it made nearly 11 million Norwegian kroner. Businesses such as J A Magnussen Engros AS, Vf Norway AS and Flåm AS followed in the ranking.

In the period from 2009 to 2019, the consumer price index (CPI) of clothing in Norway decreased overall. In 2019, the average CPI was measured at 103.1, where the year 2015 equals 100. This index measures changes in average costs of most consumer goods and services. It records inflation and deflation (rising and falling prices). According to a survey from 2019, most Norwegians bought their clothes at “fast fashion” stores, while even less than half stated to buy clothes in secondhand shops. The most important factors influencing clothing purchases were the price, fit and quality, and only to a small degree the ecological impact of the product.
This text provides general information. Statista assumes no liability for the information given being complete or correct. Due to varying update cycles, statistics can display more up-to-date data than referenced in the text.
Published by Statista Research Department, Feb 21, 2022

Number of companies in the manufacture of wearing apparel industry in Norway
1,333

International trade in footwear and accessories

Varner AS and Voice Norge AS 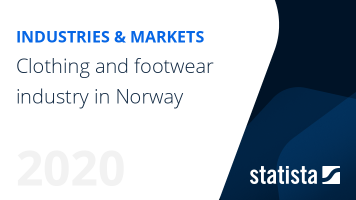 The most important key figures provide you with a compact summary of the topic of "Clothing and footwear industry in Norway" and take you straight to the corresponding statistics.