Aging population of the Asia-Pacific region

Life expectancies, fertility rates, and mortality rates all differ significantly throughout the region. Between 2015 to 2020, Hong Kong had the highest life expectancy at birth, followed by Japan, while the life expectancy at birth for citizens of Myanmar was approximately 18 years lower than Hong Kong. However, when attempting to evaluate the region as a whole, certain deductions can be made. The region is, in fact, experiencing both lower fertility and mortality rates. As citizens have increasingly strayed from traditional norms, the birth rates have declined. Alongside lower fertility rates, improved healthcare has ensured that people are living longer. This in turn has created aging populations in many countries across the Asia-Pacific region.
The age structure of the many populations throughout the region varies greatly. The population of Singapore had the highest median age, which was over double the median age of Timor-Leste’s population. Due to falling fertility rates, the shares of children in the total populations of Hong Kong, South Korea, Japan, and Singapore all in the range of 12 percent. Correspondingly, many Asia-Pacific countries were forecasted to have significant shares of populations older than 65 by 2035.

Urbanization in the region

In the following 4 chapters, you will quickly find the 28 most important statistics relating to "Demographics in the Asia-Pacific region".

The most important key figures provide you with a compact summary of the topic of "Demographics in the Asia-Pacific region" and take you straight to the corresponding statistics.

Demographics of the Philippines 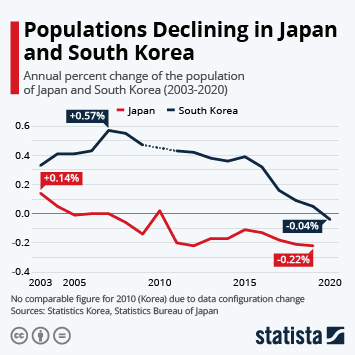