Published by Statista Research Department, Nov 17, 2022
The mobile communications sector in Latin America is valued at 60 billion U.S. dollars, out of which one quarter - specifically 15.2 billion U.S. dollars - comes from the Mexican mobile communications sector. Around a third of this value stems from the sales of devices, while the remaining two thirds come from service sales. In terms of subscriptions, Mexico is one of the largest mobile markets in Latin America, surpassed only by Brazil, which is the region’s most populated country. In 2021, the mobile communications market in Mexico was dominated by Telcel, holding a market share of 64 percent based on the number of mobile subscriptions. Other important players in the sector include Telefonica, operating as Movistar in Mexico, and AT&T.

The number of mobile internet users in Mexico has been on the rise for over a decade, and it is forecast to surpass 97 million by 2026. The most frequent activities among mobile users include social networks and chats, emails, and web searches. As for the type of mobile connections, more than 80 percent of traffic is generated on the 4G network. Meanwhile, 5G technology continues to gain traction in the country, with estimates indicating that by 2025, up to 14 percent of Mexico’s mobile connections will be to a 5G network.

In the following 6 chapters, you will quickly find the 32 most important statistics relating to "Mobile communications in Mexico". 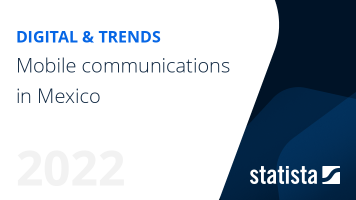 The most important key figures provide you with a compact summary of the topic of "Mobile communications in Mexico" and take you straight to the corresponding statistics.

Mobile communications in the United States