Apple and Samsung lead the U.S. smartphone market. Together the two accounting for almost 80 percent of smartphone unit sales in the country. Apple’s iPhone is the most popular smartphone with U.S. American consumers, with 51 percent of subscribers using an Apple device as of January 2022.


U.S. home to the largest telcos

AT&T is the largest telecommunications provider in the world in terms of overall revenue. In the fourth quarter of the company's 2021 financial year alone, AT&T generated 40.96 billion U.S. dollars.

AT&T has one of the highest ARPU – the average revenue generated by each user – amongst all wireless carriers in the U.S., while T-Mobile US has one of the lowest.
This text provides general information. Statista assumes no liability for the information given being complete or correct. Due to varying update cycles, statistics can display more up-to-date data than referenced in the text.
Published by Statista Research Department, Oct 27, 2022

Number of mobile wireless minutes use in the United States
2,881bn

Mobile wireless data/voice traffic in the United States 2010-2015, by type 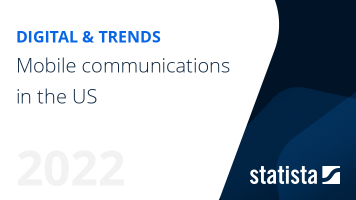 Go to report Mobile communications in the US
Top Seller

The most important key figures provide you with a compact summary of the topic of "Mobile communications in the United States" and take you straight to the corresponding statistics.