Published by
M. Shahbandeh,
Mar 16, 2022
World fish production is divided into fishing (capture) and aquaculture. In 2020, approximately 90.5 million metric tons of fish were captured, while 84.1 million metric tons were bred, raised, and farmed through the controlled aquaculture process. Since it started in the 1960s, the farmed salmon industry has grown substantially in the past decades, and today approximately 70% of salmon produced worldwide is farmed. In 2020, more than 2.6 million tons of farmed salmonids were produced, in comparison only around 550,000 tons of wild salmonids were caught.

The biggest player in the salmon industry are Norway. In 2019, the export value of salmon from Chile added up to 4.66 billion U.S. dollars. That year, approximately 888.92 million Canadian dollars' worth of Atlantic salmon was exported from Canada , a decrease from around 971 million Canadian dollars' worth in the previous year. Canada is the fourth largest salmon producer worldwide, behind the UK, Chile, and Norway.

In the following 5 chapters, you will quickly find the 33 most important statistics relating to "Salmon industry". 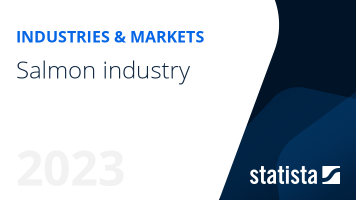 The most important key figures provide you with a compact summary of the topic of "Salmon industry" and take you straight to the corresponding statistics.

Fish and seafood industry in Norway