The fish and seafood industry is of high importance in Norway. With its long coastline, the country provides the best conditions for domestic fishing. In recent years, the revenue generated with the processing and preserving of fish, crustaceans and mollusks increased. Comparing these three countries, Norway achieved by far the highest sales, followed by Denmark and, at some distance, Sweden.

Among all farmed animals, Atlantic salmon is one of the most farmed fish in Norway; the country is the largest producer of salmon worldwide. The sales volume of salmon for consumption rose from 940 thousand metric tons in 2010 to 1.4 million metric tons in 2020. That same year, the sales value amounted to 65 billion Norwegian kroner. Norway is not only the largest salmon producer, it also belongs to one of the largest fish- and seafood exporting countries in the world. Especially the export value of salmon grew in the past years, reaching around 81 billion Norwegian kroner in 2021.

There are many Norwegian companies operating in this industry. SalMar, the global seafood company, which specializes in the production of farmed salmon, is one of them. It was founded in 1991 and is based in Frøya. The company’s sales revenue increased strongly from 7.16 billion Norwegian kroner in 2014 to 15 billion Norwegian kroner in 2021. In this year, SalMar’s share of sales was highest in Europe (excluding Norway), followed by Asia, the United States as well as Norway. Over 1.1 thousand employees worked full-time in the company

Other Norwegian fish and seafood companies of note are the Lerøy Seafood Group, Cermaq and Grieg Seafood.
This text provides general information. Statista assumes no liability for the information given being complete or correct. Due to varying update cycles, statistics can display more up-to-date data than referenced in the text.
Published by M. Ridder, Jun 14, 2022

Employee number in the processing and preserving of fish and seafood industry in Norway
10,370

Revenue of the processing and preserving of fish and seafood industry in Norway
6.54 EUR 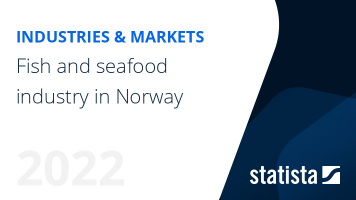 The most important key figures provide you with a compact summary of the topic of "Fish and seafood industry in Norway" and take you straight to the corresponding statistics.