Published by
M. Shahbandeh,
Apr 13, 2022
Fish and seafood is often lauded as a healthier, lighter option than a steak or a pork cutlet. Growing populations, changing attitudes towards meat consumption, and the rise in the number of people following a pescatarian diet may have pushed global fish production to rise in recent years. As a country with a huge coastline and an abundance of pristine lakes and rivers, it comes as no surprise that Canada has a thriving fish and seafood industry, exporting over five billion U.S. dollars of fish in 2020. Average Canadian household spending on fish and seafood comes to over 270 Canadian dollars per year.

The volume of freshwater fish produced in Canada has fluctuated and was at just under 20 thousand metric tons in 2020. The shellfish industry is also a major part of Canadian seafood production; almost 76,600 metric tons of shellfish were produced in 2020. The total seafood preparation and packaging industry in Canada was estimated to have generated around 5.4 billion U.S. dollars in the same year. Although Canada is a major freshwater fish producer, many popular fish species are not widely produced there. Some of the different varieties of freshwater fish imported to Canada include trout, tilapia, and catfish. In 2021, over 64 million Canadian dollars of trout were imported to Canada. Canada’s main freshwater fish exports in that year were whitefish, pickerel, and perch.

The most widely available kinds of fish in Canada are fresh and frozen sea fish, with freshwater fish making up only a small proportion of what is available on the market. The main reasons Canadian consumers eat fish and seafood are taste and because they are a good source of nutritious fats. When deciding what kind of seafood to purchase, the factors that consumers are most concerned about are that the product is fresh and of good quality, only about four percent of Canadian consumers look for locally produced options. The most popular variety of fish among Canadians is salmon, with about half of consumers eating salmon at home in the past six months.

In the following 4 chapters, you will quickly find the 26 most important statistics relating to "Fish and seafood industry in Canada ". 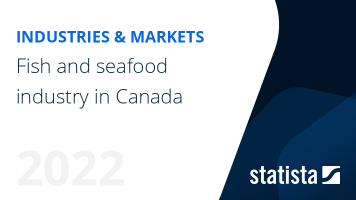 The most important key figures provide you with a compact summary of the topic of "Fish and seafood industry in Canada " and take you straight to the corresponding statistics.