Published by L. Granwal, Nov 17, 2022
As a nation whose population is spread so widely, having a robust telecommunications network in Australia is crucial. Decades of continual improvement have resulted in extensive fixed-line and mobile infrastructure. Included in this are fiber, towers, wires, sensors, satellites, radio spectrum, and data centers. The industry is relatively open for competition for carriers and service providers, though most segments are dominated by just a few companies. The market is regulated by both the Australian Competition and Consumer Commission (ACCC) and the Australian Communications and Media Authority (ACMA).

Fixed-line telephone services have continued to decrease in popularity across the nation. Many households are opting to rely solely on their mobile device for making and receiving calls. The flexibility and relatively low cost of mobile plans have likely driven this trend. In terms of mobile service providers in Australia, Telstra leads the retail market with Optus and Vodafone trailing behind.

Australians are not only using their mobile phones to send messages and make calls. Internet-enabled mobile devices are used for everyday activities such as banking, reading news, social media, and streaming digital content. With faster and more reliable 5G technology being implemented in Australia, mobile internet has started to gain momentum as competition to the country’s recently upgraded broadband network.

The National Broadband Network (NBN) was a government initiative that aimed to upgrade the country’s broadband infrastructure by 2020. The NBN was built using different broadband network technologies including fiber to the premises, fiber to the node, as well as fixed wireless and satellite services, with the overall goal of making fast internet accessible to Australians. This was implemented by NBN Co, a corporation established by the Australian Government. For Australian consumers to make use of this infrastructure, internet service providers contract with the NBN to access the network and then further sell internet access to end-users.

Who are the major internet service providers?

Telstra dominates the wholesale market of NBN broadband services with TPG Telecom, Optus, and Vocus Group making up most of the remaining market. Telstra’s dominance has remained largely unchanged since the NBN roll-out. The recent merger of TPG Corporation with Vodafone Hutchison Australia has led to TPG Telecom asserting itself as Telstra’s biggest competitor in the retail broadband market. In a recent survey, over half of Australians stated they were unlikely to change their internet provider, which indicates that the make-up of the retail broadband market will remain fairly constant in coming years.

In the following 6 chapters, you will quickly find the 39 most important statistics relating to "Telecommunications industry in Australia". 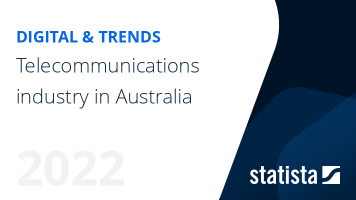 The most important key figures provide you with a compact summary of the topic of "Telecommunications industry in Australia" and take you straight to the corresponding statistics.