Published by Statista Research Department, Sep 8, 2022
The number of internet users in Australia is forecast to exceed 23.3 million by 2025. Interestingly, Australia’s internet penetration rate has remained relatively stagnant over the past five years. Nevertheless, the internet and its far-reaching applications are integrated into Australian daily life. The most popular online activities of adult internet users in Australia include email, web browsing, banking, video streaming, and shopping. Australia has one of the fastest average mobile internet speeds in the developed world. This is taken advantage of by ‘on-the-go’ e-commerce, banking, and media streaming. The usage of mobile internet will likely continue to increase as Australians look for more convenience in their daily tasks and entertainment options.

The country’s internet infrastructure has developed rapidly over the past decade. In 2009, the NBN Co Limited was established to build and operate the nation's wholesale broadband access network, known as the National Broadband Network (NBN). The key objectives of NBN Co are to ensure all Australians have access to fast broadband as soon as possible, at affordable prices, and at a minimum production cost. The NBN technology mix encompasses a range of connection types, with fiber connections making up the largest proportion.

Who are the main internet service providers?

How has COVID-19 changed the way Australians use the internet?

Undeniably, the impact of the coronavirus outbreak has affected how Australians are using the internet. During the height of the pandemic in 2020 and 2021 when brick-and-mortar retailers were closed for extended periods due to lockdowns, online retail spending increased in almost every category, with the purchasing of games and toys, takeaway food, and grocery and liquor items from domestic retailers increasing by the largest margins. Aside from e-commerce, Australians watched more shows or films on streaming services such as Netflix. With many people forced to work from home and businesses becoming accessible online, having reliable internet has been brought to the forefront of infrastructure development in the country. NBN Co. has indicated it will invest billions of Australian dollars to roll-out superfast broadband across the country. This move is crucial if the NBN wants to remain competitive with 5G mobile technology, which is also expanding its coverage across the nation.

In the following 5 chapters, you will quickly find the 37 most important statistics relating to "Internet usage in Australia". 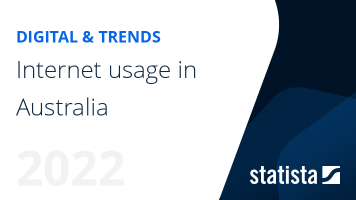 The most important key figures provide you with a compact summary of the topic of "Internet usage in Australia" and take you straight to the corresponding statistics. 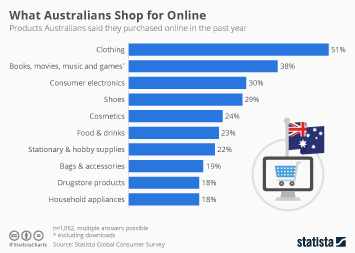