Published by Statista Research Department, Feb 8, 2022
The Spanish construction industry’s outlook has experienced dramatic changes over the past two decades. With the housing market bubble, the value of the construction industry in the Spanish economy soared until it constituted a tenth of the country’s GDP. However, when the bubble burst and the Great Recession began in 2007, the industry was one of the most affected and its profits plummeted. As the demand for new projects dwindled and heavy public investment in the sector collapsed along the demand for new projects, net profits of the industry’s giants such as FCC dropped to negative values in the first half of the 2010s. The industry has showed a gradual recovery since then. Between 2014 and 2019, the gross value added of the sector came to nearly 20 million euros.
Main companies
ACS – Actividades de Construccion y Servicios – weathered the crisis and became the dominant force in the Spanish construction market by outperforming its competitors in several respects. To begin with, ACS achieved the largest sales value among Spanish construction companies in 2019. The very same year, ACS Group’s EBITDA exceeded three billion euros in revenue, which up until then was unprecedented for the group and beyond reach for competitors such as FCC or Sacyr. Nevertheless, ACS’ predominance has not extended yet to the stock market. Ferrovial’s market capitalization was the largest among national construction firms as of 2019, almost double the market cap of ACS.

International activity
Both ACS and Ferrovial are global standouts thanks to their international engagement. Moreover, ACS became the construction contractor with the highest revenue in the world in 2018. The international market is crucial for Spanish construction firms because most sales revenues are generated from this source. For example, over two thirds of OHL’s revenue was derived from international sales in 2019. The boost of international revenue registered by companies such as Acciona and Sacyr has partially compensated for the domestic market's slow recovery.

In the following 6 chapters, you will quickly find the 34 most important statistics relating to "Main construction companies in Spain". 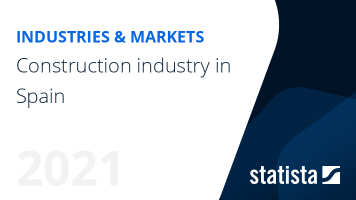 The most important key figures provide you with a compact summary of the topic of "Main construction companies in Spain" and take you straight to the corresponding statistics.