As of the third quarter of 2018, the number of British construction firms totaled 325,736, with 259 of these firms employing 300 people or more. Across the UK, people were employed in a variety of occupations in the construction industry. By 2023, numbers were forecast to rise.

The growth in production value of the industry is echoed in the number of new dwellings being commenced or completed. Since the financial crash in 2008, figures have been increasing in all countries. In England, the number of dwellings started amounted to more than 165,000 in 2018/19, with new housing commenced in Wales reaching 5,970. By comparison, the number of those completed totaled 203,870 in the United Kingdom.

In the following 6 chapters, you will quickly find the {amountStatistics} most important statistics relating to "Construction Industry in the UK".

Employment in the construction industry

The most important key figures provide you with a compact summary of the topic of "Construction Industry in the UK" and take you straight to the corresponding statistics.

Employment in the construction industry

Public building construction in the UK 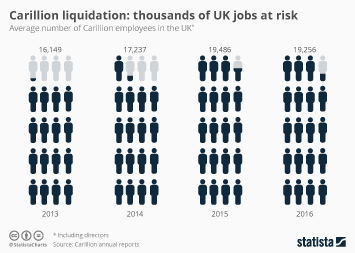