Smart devices are gadgets that are connected to another device or integrated into a network. It includes smartwatches or fitness trackers, as well as headphones and smart speakers. These devices interact with the user and each other through wireless protocols, such as Bluetooth, WIFI or 5G. Mobile payment was very popular in China and the smartwatch can be used for contactless payment. In addition to that, newer generations of smartphones, smartwatches, and bracelets allow consumers to track their health. The smart speaker can serve as the control center of the smart home. Users can control other devices in diverse ways, or even direct the refrigerator to restock milk via an online retailer.

China’s smart device market has been highly competitive, but it excluded most foreign electronics brands. In the wearable sector, Huawei, Xiaomi, and Apple dominate the market with Huawei occupying around a third of the market. In contrast to that, Apple’s Airpods were the most popular true wireless headphones in the country. However, besides Apple, most foreign companies found it difficult to get a foothold in the Chinese market. Domestic brands have been able to capitalize on favorable regulation and a comprehensive understanding of the market, stakeholders, and the consumer.

The popularity of smart devices in China mirrors a broader, global trend of deeper integration of technology in new aspects of life. China, a country with a vigorous tech industry and drive to innovate and modernize, is among the global leaders in digitalization. For instance, the country was among the leaders in building smart cities by constructing smart grids and improving urban transport via smart transport systems. On a much smaller scale, smart homes change the format of people’s habitat. Nearly every aspect of the household undergoes digitalization and becomes integrated into a software ecosystem which allows central control. The broad range of smart home products included household appliances, such as washing machines and refrigerators, consumer electronics, such as televisions, and home entertainment systems. Other smart product categories include security products which include smart locks and IP surveillance cameras.

In the following 5 chapters, you will quickly find the 25 most important statistics relating to "Smart devices in China". 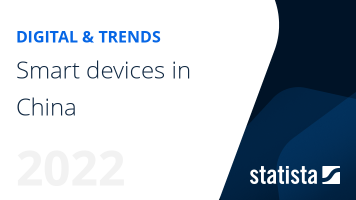 The most important key figures provide you with a compact summary of the topic of "Smart devices in China" and take you straight to the corresponding statistics.