Consumer durables was one of the largest and fastest growing segments within India’s consumer market. It consists of two main categories: home and household appliances, and consumer electronics. Major and small appliances, like refrigerators, washing machines, and microwave ovens, vacuum cleaners and fans, are broadly classified as home appliances. As for consumer electronics, the definition in India vary depending on the source. When mentioned in the context of consumer durables, it mostly includes television sets, radios, personal computers and sometimes mobile phones and other electronic devices, like tablets, wearable devices, etc.

The leader of the household appliances market was Whirlpool of India Limited, with a revenue of 61.21 billion Indian rupees in financial year 2021. Domestic brands like Bajaj and Crompton were also popular in the market. And with the growing popularity of smart devices, including smartphones, smart TVs, and smart wearables, despite the initially low penetration rate compared to other more mature markets across the globe, the consumer electronics segment in India would become a more and more important, with an estimated market size of 58 billion U.S. dollars in 2025. In the category of smartphones and smart wearables, Chinese vendor Xiaomi had preformed very well in recent years.

As a country with a huge population, and growing household income and purchasing power, India was the second largest market for major appliances and the third largest market for small appliances in 2019, based on revenue. In urban India, refrigerators and mixers were among the most popular home appliances. For instance, the air conditioner market has seen steady growth since 2009, with climate change induced heat waves in India as one of the driving forces behind its increased demand. For many durable goods, India is still a market with great growth potential. In the consumer electronics segment, televisions occupied the top with an estimated 200 million households in financial year 2020 with a projected market size of 13.66 billion U.S. dollars in 2021. However, with the impact of COVID-19 pandemic, the market growth might be interrupted for a few years.
This text provides general information. Statista assumes no liability for the information given being complete or correct. Due to varying update cycles, statistics can display more up-to-date data than referenced in the text.
Shangliao Sun
Research expert covering India
Get in touch with us now
Published by Shangliao Sun, Apr 28, 2021

Leading domestic appliance companies in India 2022, based on net sales 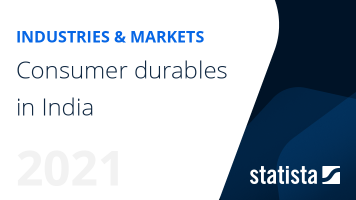 The most important key figures provide you with a compact summary of the topic of "Consumer durables in India" and take you straight to the corresponding statistics.