The term consumer electronics was originally used to indicate a wide range of personal consumer products that contain electronic circuit boards. During the last few decades, the application of the term had been narrowed down to devices specifically for home communication, entertainment, or information uses. The definition varies in the Indian context, but when compared with consumer durables, this segment mostly includes television sets, home audio and video devices, personal computers, mobile phones, and other electronic devices, like tablets and wearable devices.

India’s electronics industry saw great growth at the beginning of this century, supported by government incentives and foreign investments. The Make in India program, National Policy on Electronics, Production Linked Incentive Scheme, and several other governmental programs were designed to stimulate the domestic electronics industry and localize electronics manufacturing. Along with a favorable foreign investment environment which helped to boost exports, the electronics manufacturing industry saw significant growth. However, many of the segments in the consumer electronics sector are still dominated by foreign companies, like Xiaomi, Samsung, and LG. India’s domestic brands, despite facing fierce competition, have been growing at a steady pace.

The consumer electronics industry is continually growing and is one of the largest industries in the world. India’s immense population, and growing disposable income and purchasing power, positions the country’s market for consumer electronics as one of the largest in the world. For instance, in 2021, India had the second highest number of smartphone users globally, just after China and with the fast expansion of the internet and development of the internet of things (IoT) technology, the demand for smart home devices is also expected to skyrocket in India. Despite the impact of the coronavirus pandemic on its economy, India was estimated to be one of the fastest growing economies in the world.
This text provides general information. Statista assumes no liability for the information given being complete or correct. Due to varying update cycles, statistics can display more up-to-date data than referenced in the text.
Shangliao Sun
Research expert covering India
Get in touch with us now
Published by Shangliao Sun, Sep 12, 2022 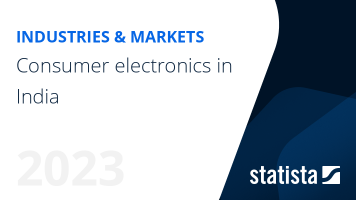 The most important key figures provide you with a compact summary of the topic of "Consumer electronics in India" and take you straight to the corresponding statistics.