Published by
Erick Burgueño Salas,
Feb 11, 2022
The Spanish public system of urban transportation is key for connecting the country’s metropolises with their peripheries as well as for providing an alternative to private transport. In 2019 alone, more than 3.1 million passengers used urban transportion. However, in the following year urban transportation use plummeted as a result of the coronavirus pandemic.

With over 2.3 thousand kilometers, length of urban rail networks in Spain is similar to that of the UK, and longer than the networks in Italy and France (except for the tram line). Commuter trains were the most popular type of train service in 2019: registering 569.7 million passengers,they had more than tenfold the number of users of long distance trains.

Rapid transit, also known as metro or subway transit, is an attractive means of transportation for commuters in big metropolises. Metro use in the Mediterranean nation is highly concentrated; Madrid and Barcelona were the cities that recorded, by far, the largest volume of subway passengers in 2019, 677.5 and 411.9 thousand, respectively. Yet, despite their status as economic hubs, these were not the cities that witnessed the largest drop of subway used due to COVID-19. Rather, Seville, Malaga and Palma were most affected.

In Spain, urban bus services vary by municipality, and are therefore, sometimes managed by consortiums, public companies and/or private enterprises that receive concessions. Buses are the most popular mean of inter-urban transportion, and in 2019 they recorded approximately 100 thousand more passengers than interurban rail transportion, the second most popular form. Madrid and Barcelona ranked as the metropolises with the largest bus fleet, and were followed by Valencia and Seville. The latter had 13 bus operators as of 2018, which is less than half the number in the Spanish capital.

In the following 4 chapters, you will quickly find the 28 most important statistics relating to "Urban public transportation in Spain". 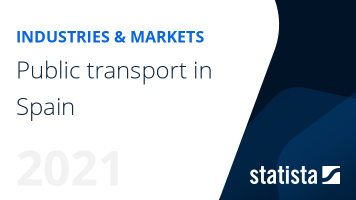 Public transport in the UK