Yogurt in the UK - statistics & facts

Published by
M. Shahbandeh,
Aug 30, 2022
Today, yogurt can be found in supermarkets around the world, in different sweet or savory variations. It is also a common food found in the diet of both Europeans and those from the United Kingdom (UK), as almost 41 percent of the worldwide yogurt market is held by Europe. In recent years, yogurt has become more appealing amongst consumers due to its status as a health-food. Due to this, the global market value of yogurt was forecast to reach about 154 billion U.S. dollars by 2027, which is more than a 40 percent increase from the 2021 value.

Yogurt production in the UK

Although the UK historically did not have strong ties to yogurt, production is becoming increasingly present due to the demand. In 2021, production of yogurt in the UK totaled approximately 463 thousand tons, increasing from 382 thousand tons in 2017. The sales value of yogurt and yogurt adjacent products such as buttermilk has increased correspondingly. However, consumers in the UK have become health conscious, as they are now reaching for more natural yogurt products. This change of dietary patterns is evidenced by the sales volume of flavored yogurt products in the UK, which decreased significantly between 2008 and 2020.

In the following 4 chapters, you will quickly find the 19 most important statistics relating to "Yogurt industry in the UK".

Statistics on the topic
Annual yogurt production in Europe
7.57m t
Sales value of fermented milk products in the UK
286.72m GBP
Average weekly expenditure on yogurt in the UK
49 pence per person 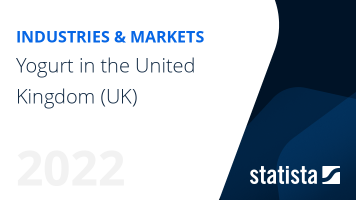 The most important key figures provide you with a compact summary of the topic of "Yogurt industry in the UK" and take you straight to the corresponding statistics.

Milk market in the UK

Food industry in the UK

Health and wellness food trends in the UK