Milk deliveries in the United Kingdom have seen a renaissance in the past few years. The number of dairy cows has increased from 1.83 million cows as of December 2010 to 1.85 million cows as of June 2021. The UK is also among the leading producers of cow milk worldwide with a production volume of 15.5 million metric tons in 2021. Grocery market leader Tesco, in an effort to ensure the stock of essential products and streamline the production output of its suppliers, reduced its skimmed milk stock (some news sources report a complete stop of skimmed milk sales), removed single-pint milk cartons and ended multi-buy offers at the end of March 2020.

Milk production in the UK has been increasing in recent years and reached over 15 billion liters in 2020/2021. Production numbers in recent years have been higher than in the early 2000s and 2010s. This should position the industry well to address increasing demand. However, the UK remains a net importer of dairy, while exports are half the size of imports. The value of milk produced in 2021 was worth around 4.8 billion British pounds. Around 5.3 billion liters of milk were sold as liquid milk.

On average, the annual milk yield per cow was over eight thousand liters per year. Of the milk provided by the cows, the largest amount was sold as semi-skimmed milk. The average household in the UK spends about 2.2 British pounds on milk per week. By far the smallest amount of money is spent on fully skimmed milk, the category Tesco removed from its stores.
This text provides general information. Statista assumes no liability for the information given being complete or correct. Due to varying update cycles, statistics can display more up-to-date data than referenced in the text.

Value of milk production in the UK
4.77bn GBP

Consumer expenditure on liquid milk in the UK
3.4bn GBP 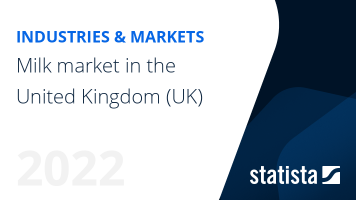 The most important key figures provide you with a compact summary of the topic of "Milk market in the UK" and take you straight to the corresponding statistics.