Published by
M. Shahbandeh,
Apr 6, 2022
Beef is one of the staple food items for consumers in the UK. In 2020 alone, the manufacture of beef in the UK generated approximately 9.6 billion British pounds. United States and Brazil are the top producers of beef worldwide, with over 12 and 10 billion metric tons production respectively.

Beef production and trade in the UK

The production value of UK beef reached an all-time high in 2017, where it had doubled in value compared to the previous 10 years. The population of cattle and calves in the United Kingdom has slowly been decreasing since 2015 and was at approximately 9.4 million in 2020. That year only about three percent of the cattle population in the UK was organic. In 2021, the sale of beef products generated approximately 4.4 billion British pounds. The export value of beef increased by over 200 million British pounds from 2015 to 2019 but dropped by over 20 percent in 2020. Ireland was the primary destination of UK beef exports followed by France.

Consumption of beef in the UK

In recent years, mincemeat, also known as ground beef, has been the beef cut of choice in the UK, and has the lowest retail sales price amongst beef cuts. The average weekly expenditure per person on beef products, however, has decreased overall. More and more consumers are trying to reduce or eliminate their meat in-take, in preference for plant-based options. Younger generations in the UK are more likely to eat less meat compared to those of other age groups. Despite everything, the beef industry in the UK is still booming.

In the following 5 chapters, you will quickly find the 30 most important statistics relating to "UK beef market". 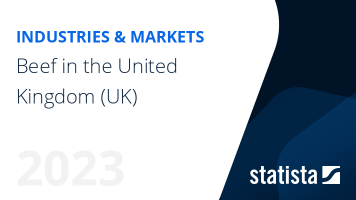 The most important key figures provide you with a compact summary of the topic of "UK beef market" and take you straight to the corresponding statistics.

Food industry in the UK