Potatoes grow well in temperate and humid regions, and wide, open spaces. In France, production is concentrated north of the Loire River, largely in the Hauts-de-France region, which accounts for two-thirds of the national supply. The surface area dedicated to this crop has been increasing since the beginning of the 2000s, and now covers over 150,000 hectares.
Looking at the market from a global perspective, France ranks eighth on the world stage, with over eight million tons of potatoes produced in 2019. Moreover, French potatoes travel far beyond the nation’s borders: France is the leading exporter of fresh and chilled potatoes worldwide, and exports around two million tons each year. The potato quality and diversity have allowed France to interact with many foreign markets, all the while maintaining its bonds with close European neighbors, such as Belgium and Spain.
While exports constitute the primary use of French potatoes, this crop also serves other purposes, such as the manufacture of processed potato products. The processing industries account for over 20 percent of the production, and most of it is used for frozen French fries and flaked mashed potatoes.

Nowadays, despite lower consumption figures than 50 years ago, the potato remains an essential product in France. Indeed, the population consumes about 50 to 55 kilograms of potatoes each year- fresh and processed combined.
Many factors actively contribute to the national success of the potato. Firstly, this product is not as expensive as other vegetables. Furthermore, while hyper and supermarkets account for the largest share of potato purchases, they are nonetheless available in almost every store, from smaller greengrocers to local markets, and all year round. Finally, potatoes are also key ingredients in many beloved dishes in France, such as raclette, thus solidifying its place in French people’s hearts and on their plates.
This text provides general information. Statista assumes no liability for the information given being complete or correct. Due to varying update cycles, statistics can display more up-to-date data than referenced in the text.

Consumption of fresh potatoes per capita in France
21kg

Consumption of fresh potatoes per capita in France 2000-2019

Consumption of fresh potatoes per capita in France 2000-2019

Breakdown of the potato production in volume in France 2014-2018, by purpose 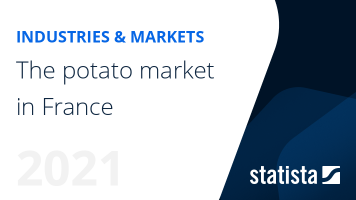 Go to report The potato market in France
Top Seller

The most important key figures provide you with a compact summary of the topic of "Potato market France" and take you straight to the corresponding statistics.