One of the world’s most versatile and main food crops is the potato: a root vegetable. The annual plant is rich with essential vitamins and minerals and can be served in a variety of ways, such as mashed, roasted, baked, or boiled. In 2020, an estimated 359 million metric tons of potatoes were produced worldwide. China is the leading potato producer worldwide: the country accounted for approximately 78 million metric tons of potatoes that year. India ranked as the second leading worldwide producer of potatoes. Roughly 89.5 million metric tons’ worth of sweet potatoes were produced worldwide that year. Production of this particular plant has decreased slightly since 2011. The value of the sweet potato market, however, is projected to grow by about seven percent between 2020 and 2027.

Potatoes are exported around the world in different forms. In 2020, prepared or preserved potatoes had a total export value of about 6.8 billion U.S. dollars, making it the leading potato export method. France, Germany, and China are the top exporters of potatoes worldwide. The United States, however, is the leading sweet potato exporter, exporting about 193.8 million dollars’ worth in 2020. In the same year, Belgium was the leading importer of fresh and chilled potatoes in the world, followed by the Netherlands and Spain.

The global market for potato processing was valued at about 26.9 billion U.S. dollars and was forecast to reach just over 38 billion U.S. dollars by 2027. Fresh Del Monte Produce Inc. is among the leading fresh fruit and vegetable processors worldwide. In 2019, the company’s fruit and vegetable sales amounted to about 4.51 billion U.S. dollars. As of April 2022, the country with the highest market price per kilogram of potatoes was South Korea, where one kilogram would cost a buyer three and a half U.S. dollars.
This text provides general information. Statista assumes no liability for the information given being complete or correct. Due to varying update cycles, statistics can display more up-to-date data than referenced in the text.

M. Shahbandeh
Research expert covering agriculture & FMCG
Get in touch with us now
Published by M. Shahbandeh, May 11, 2022 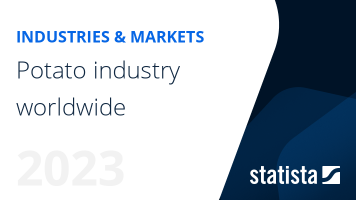 The most important key figures provide you with a compact summary of the topic of "Potato industry worldwide" and take you straight to the corresponding statistics.