Published by
P. Smith,
Jan 12, 2022
Jewelry are ornamental or decorative accessories worn for personal adornment, religious or cultural reasons. They are often made with precious metals such as gold and silver, and can be worn in a variety of ways including earrings, necklaces, and watches. The global jewelry market is forecasted to grow in the coming years to reach a value of 292 billion U.S. dollars by 2025. Additionally, online market for jewelry is growing steadily and is expected to value at about 60 billion dollars worldwide by 2027.

Jewelry industry in the UK

The Jewellery Quarter in Birmingham is home to the largest concentration of jewelry businesses in Europe. In 1780 there were just 28 jewelers in that quarter, which has since grown to over 700 independent jewelers responsible for almost 40 percent of UK jewelry production. Today, almost 1,303 jewelry manufactures exist in the entire UK. The total turnover of businesses manufacturing jewelry remained stable in recent years, with small fluctuations. The annual turnover grew to 1088 million British pounds by 2019.

Wholesale and retail of UK jewelry

With those 1,300 some odd jewelry manufacturers, there was a recorded number of 1,239 jewelry wholesale enterprises in the UK in 2019. Unlike the number of manufacturers, the number of wholesalers has decreased in recent years, down from 1,480 in 2008. In 2019, manufacturers' sales of jewelry had a value of 564 million British pounds. As of 2020, the value of watch and jewelry sales declined by about 25 percent on a year earlier due to the COVID-19 pandemic. Element Jewellery and Signet Jewelers are some of the leading jewelry retailers in the UK.

In the following 5 chapters, you will quickly find the 31 most important statistics relating to "UK jewelry industry". 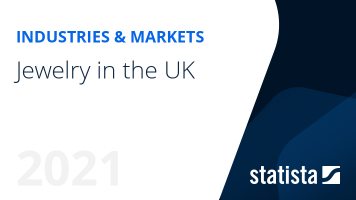 Go to report Jewelry in the UK
Top Seller

The most important key figures provide you with a compact summary of the topic of "UK jewelry industry" and take you straight to the corresponding statistics.

Jewelry market in the United States