Jewelry consists of decorative items or accessories which are typically worn on the body or attached to clothing. Jewelry was initially very crude in form, consisting of basic materials like bone, stone, and shell. As time progressed so too did the form and materials used for pieces of jewelry. Precious metals such as gold, silver, and platinum are molded into rings, bracelets and many other forms. Gemstones, such as diamonds, and precious items are often combined with those metals to create even more elaborate and fancy pieces. However, it is not always made of expensive materials as there is also a market for costume jewelry which is much more accessible and modestly priced.

Jewelry stores are a feature of high streets and malls throughout the United States. As of 2020, there were a total of around 19,300 jewelry stores in operation in the United States. Jewelry store sales have been upwards of thirty billion U.S. dollars in each of the last five years with sales tending to peak in December with retail sales often double those of any other month of the year. Signet Jewelers, whose brands include Kay and Zales, lead the way among retailers of jewelry in the United States, with retail sales of over five billion U.S. dollars in 2020, as well as over 2,500 thousand stores. Tiffany & Co., with its iconic New York flagship store, is arguably the biggest name in the world of jewelry. Tiffany & Co. have lower sales and fewer stores than Signet Jewelers.
This text provides general information. Statista assumes no liability for the information given being complete or correct. Due to varying update cycles, statistics can display more up-to-date data than referenced in the text.
P. Smith
Research expert covering apparel industry and general merchandise
Get in touch with us now
Published by P. Smith, Jan 12, 2022

Breakdown of the U.S. jewelry market in 2018, by product type 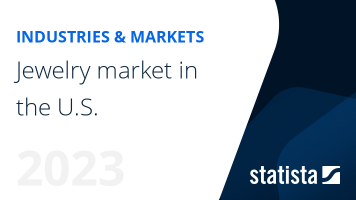 Go to report Jewelry market in the U.S.
Top Seller

The most important key figures provide you with a compact summary of the topic of "Jewelry market in the United States" and take you straight to the corresponding statistics.