Published by Statista Research Department, Feb 1, 2022
The history of Romanian cinema dates back to the late 19th century, specifically a couple of months after the first public screening of the Lumière brothers' film in Paris, 1895. By 2020, there were already 95 active cinemas in the country, with a total of 449 cinema screens. In 2020, Cinema City, a brand of multiplex cinemas, owned the highest number of active cinemas which were located in 19 Romanian cities.

In 2020, the cinema industry was severely affected by the coronavirus (COVID-19) pandemic – starting mid-March, cinemas were facing official closures. Despite this, 2020 was one of the best years for Romanian film productions. In other words, the country’s film industry produced seven documentary films, out of which four were entirely national productions.
“Collective” is one of the most popular Romanian titles. The story follows a group of investigators who try to uncover a public health-care fraud, which led to Romania’s deadliest nightclub fire in 2015. The production was awarded the European Film Award for Best Documentary in 2020. It also received a nomination at the 93rd Academy Awards for the Best International Feature Film category.
In terms of animation films produced in Romania, there was a considerable decrease in 2020 compared to the previous year. Still, “The Island”, an animated musical comedy directed by Anca Damian, is scheduled to premiere at Cartoon Movie, an animation event, in 2021. Damian was extremely successful in 2019 with her other animated movie, “Marona’s Fantastic Tale”. The production received a total of 12 awards and it was also nominated for Best European Animated Feature Film at the European Film Awards.

Because of the COVID-19 pandemic, the country’s gross box office revenue dropped by approximately 75 percent in 2020 compared to 2019; totaling only 68 million Romanian lei. In terms of audience, the most popular film in cinemas in 2020 was a Romanian comedy, “Miami Bici”, which attracted more than half a million viewers. Moreover, the title was the highest grossing box office premiere in 2020, reaching 11.6 million Romanian lei. In terms of box office opening weekends, “The Fate of the Furious”, a 2017 release, set a record revenue at 1.74 million U.S. dollars. Given the popularity of science fiction and fantasy genres in Romania, films such as the 2015 “Star Wars: Episode VII – The Force Awakens” and 2019 “Avengers: Endgame” had some of the most profitable opening weekends, at just under one million U.S. dollars each.

In the following 7 chapters, you will quickly find the 33 most important statistics relating to "Cinema in Romania". 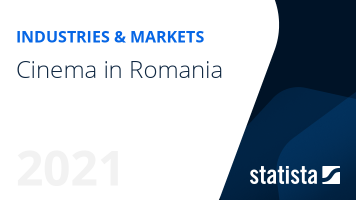 The most important key figures provide you with a compact summary of the topic of "Cinema in Romania" and take you straight to the corresponding statistics.

Cinema and film industry in Australia